Castleford Tigers Women battled their way to a fantastic first victory of the season 14-8 against Leigh Miners Rangers Ladies on Sunday, 14th August at Castleford Panthers. 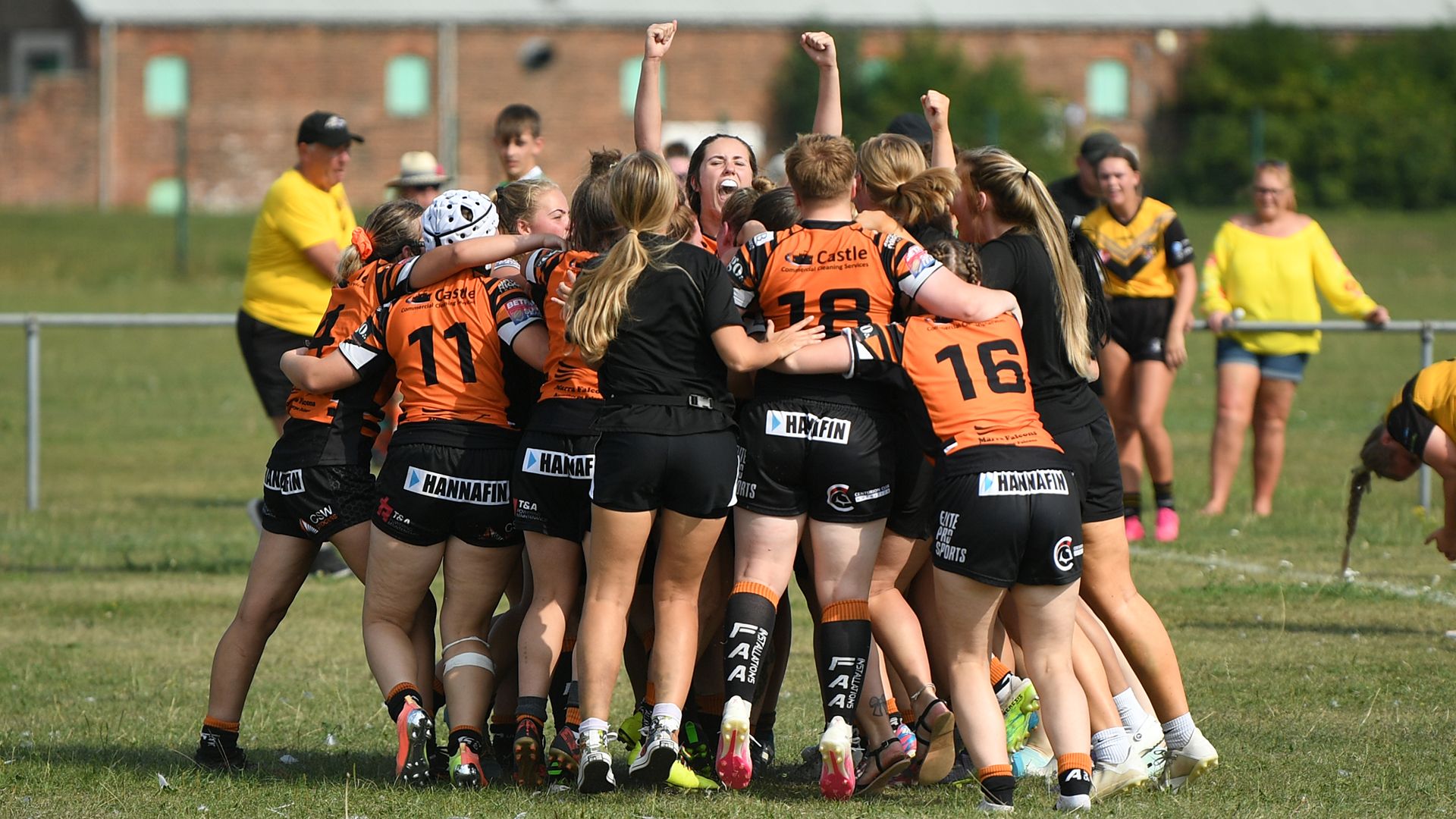 Castleford Tigers Women battled their way to a fantastic first victory of the season 14-8 against Leigh Miners Rangers Ladies on Sunday, 14th August at Castleford Panthers.

In sweltering conditions, the Fords valiantly fought their way to an all-important first win as part of the chapter of the women’s programme at the club, besting a side they lost away to just three weeks earlier.

Results have been tough for our incredibly young and developing side, but a real team bond has been built in the season, with clear improvements on the field that have been made as the campaign has progressed.

The Tigers with its Foundation have put into place other the past eight months a pathway and programme with the vision to get more girls playing rugby at Castleford Tigers. With Academy, Scholarship and College provisions in place, a strong team of coaches and staff including medical plus the use of top rugby league facilities – it is hoped the future for women’s rugby in Castleford is bright. The victory over a good Leigh Miners side was a well-deserved moment to celebrate for all involved in the Tigresses camp. 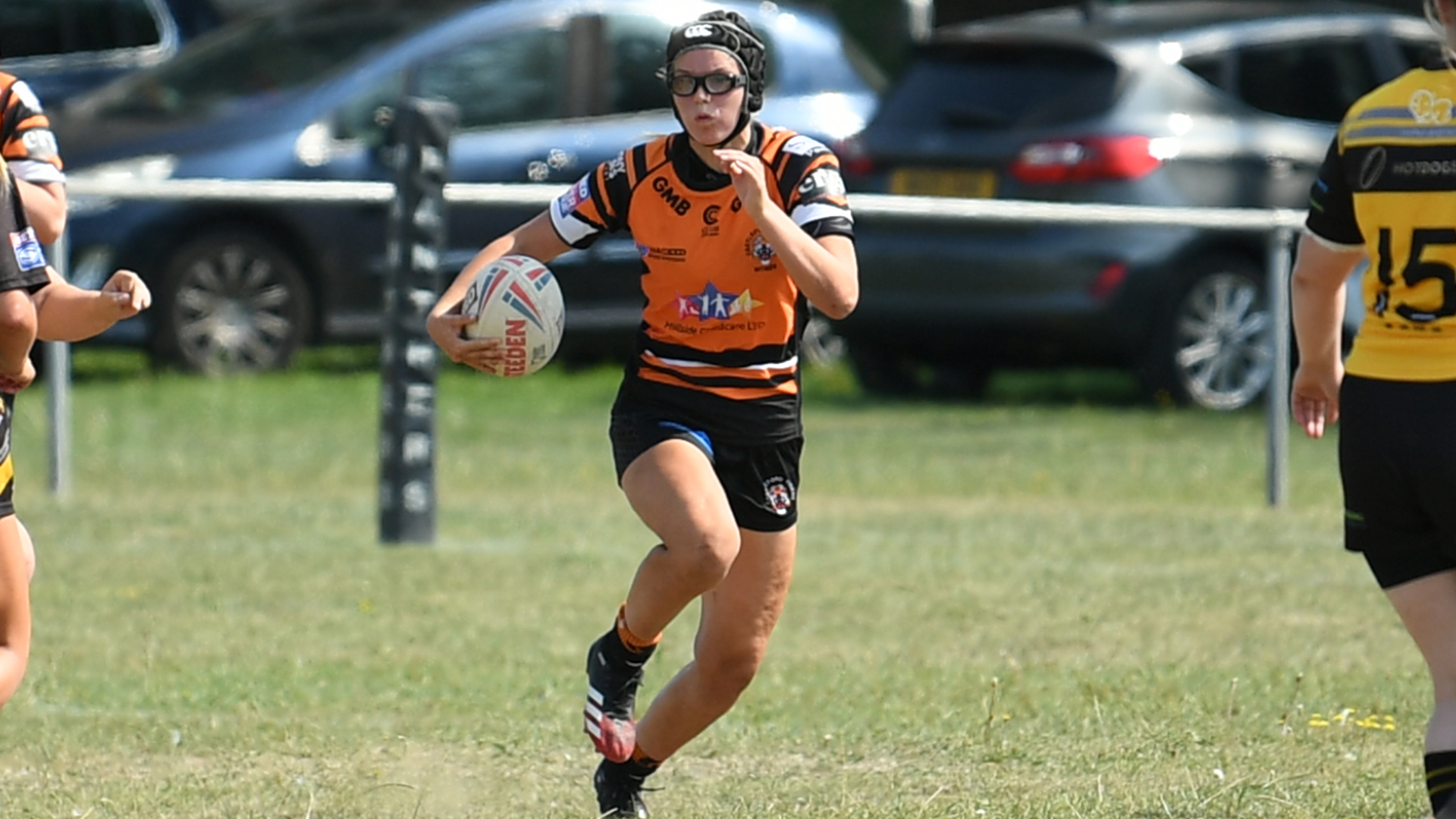 Onto the match action and Head Coach Matty Faulkner was boosted by being able to select arguably his strongest side to date, with the captain and vice-captain Kaitlin Varley and Maisie Lumb available for selection, along with a few more names who have gained valuable match minutes in 2022.

In ridiculously hot temperatures the game got underway with Cas setting the tone early with some solid defence and pinning the Miners inside their own twenty. Pushing the visitors back Tally Bryer hoisted a kick high which got knocked on by Leigh and into Cas hands, Grace Dyke got to it and ran towards the corner for the opening points. Chloe Smith was on kicking duties but pulled the chance for two extra points from out wide.

For all their good defensive work Cas gave the Rangers chances to challenge in attack through some six-agains as the first water break neared. Two six-agains in quick succession allowed the visitors to go in for their first points. Their player juking near the line and going over to score, but the conversion could not be added making it 4-4.

The water break was a welcome boost to all under the hot sun, Cas almost scored on the back of it too, but a chance went begging with Leigh on the ropes but an awkward pass for Chelsi Merritt went into touch. Bryer grew in confidence as the game went on, on the fourth tackle she elected to chip and chase on the left edge, catching the Leigh fullback out and a chase began, if Tally got to it just a second earlier before the ball ran dead it would have been an incredible score, but it was not to be – yet.

Castleford kept building the pressure in defence and getting the ball in very good territory, moments after Bryer’s attempt, her halfback partner Smith spotted the numbers advantage on the right and threw a huge pass out to Chelsea Merritt who still had to round the last defender and crash into the corner for the Tigresses’ second try. Smith missed the conversion. 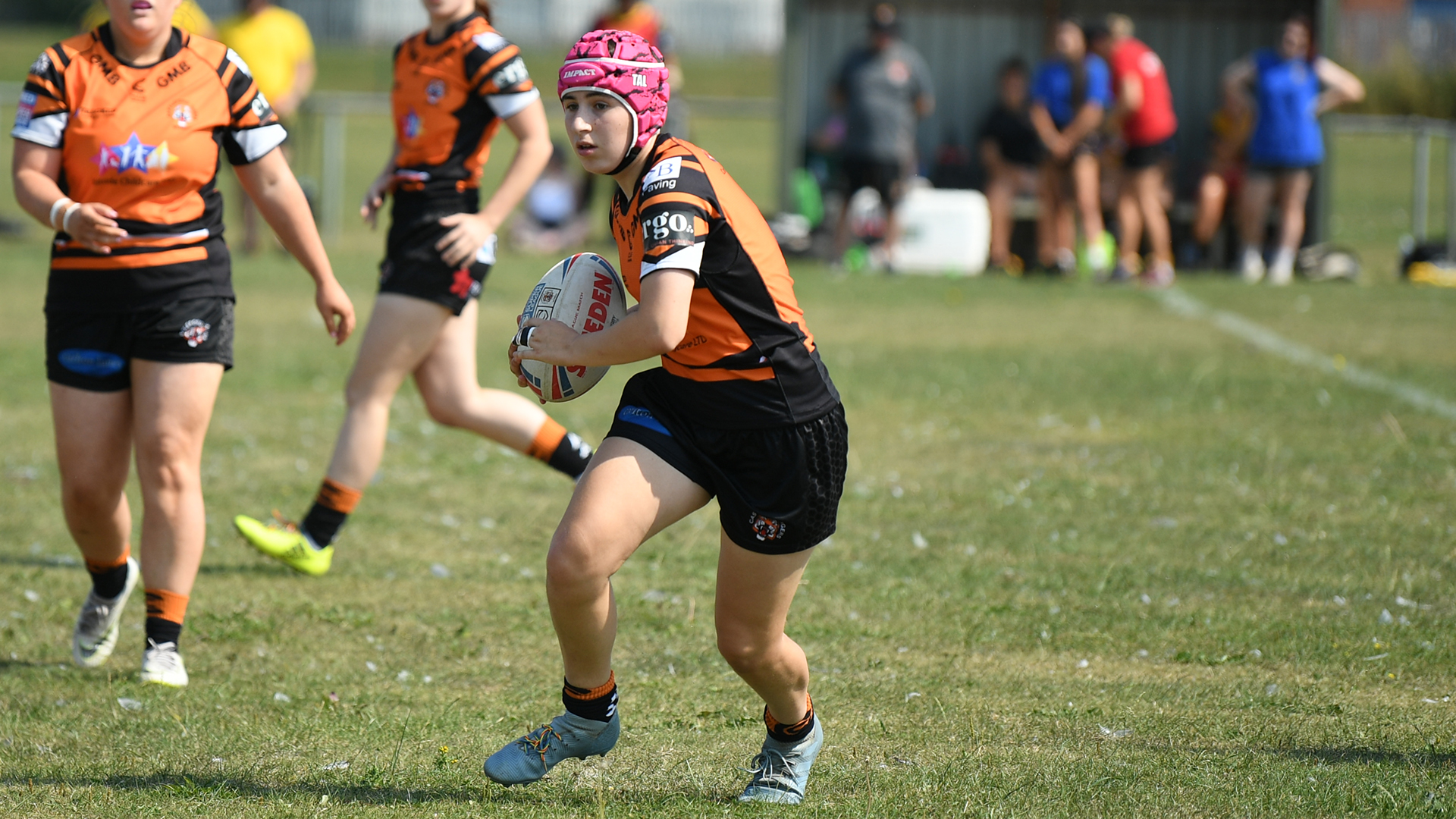 With the lead back in their hands, the Fords felt confident and wanted to push for more, Lumb with a typically robust carry pulled in four defenders as she sought to grind over but got held just short of the line. Leigh held on but the Tigers got judged, twice, to make errors firstly an offside which left some home fans scratching their heads and compounded it with an alleged high shot which caused some uproar. Much like their first score, Leigh managed to use these back-to-back errors to score again, their left winger made the initial break with fullback Grace Dyke stopping her but with a retreating defence not set the Miners pulled right for an unconverted try making it level once more at 8-8 to end the first forty.

The break came at a good time for all, with errors and early fatigue kicking in – Faulkner’s troops came out wanting to regain their lead and finally secure their first victory. That intent was clear with some solid tackles and running, Smith attempted a hanging kick which bounced off the crossbar, but Leigh managed to get to it to quell the early chance.

At this point it became a real defensive battle, neither side wanting to concede the next points, Bryer chanced her arm again with a chip and chase but had Merritt in support this time too, but it was agonisingly close to staying in the field of play this time. The quick 20m tap restart allowed Leigh to get a roll on and another offside call moved them to within 10m, but the young Fords firmly kept the big Rangers pack out. Following the handover, strong carries from Merritt and Martha Brown got the Tigers out of our own half and into the hour-mark water break in a better field position.

Throughout the afternoon the debuting Kayleigh Waller proved to be a handful for the Miners, stepping a couple of players and still needing three more to stop her efforts. It was a fantastic match for her in her first Cas game. 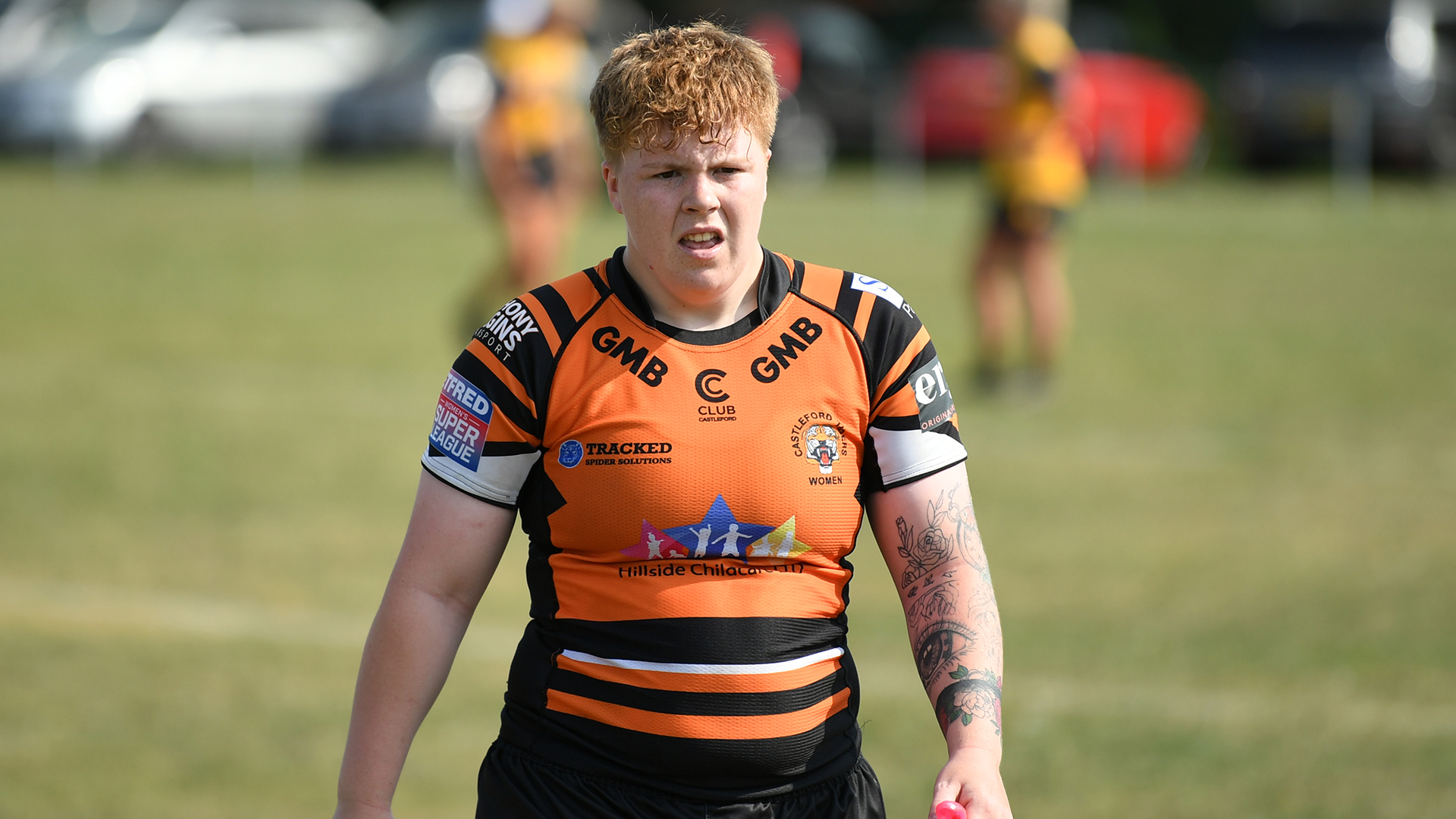 The final rallying call in the water break came from assistant coach Paul Watson, and the Tigresses took to the field in the hopes of securing the win. Patiently building a couple of sets, Bryer for a third time kicked and chased, this time on the ground and not from far out, grabbed the ball and grounded it to the echoing screams of her teammates’ delight. Smith with her easiest kick of the day added the two points to give Faulkner’s side the command with fifteen minutes to go.

The likes of Steph Spence Hirst, Alice Iwanejko, Beth Seisay-Reynolds, and Aimee Wood had performed solidly in defence throughout the game, but now was the time to really hold on. A good strong defensive set after the points was just what was needed, and Leigh kept trying nobly but could not get closer than 20m out.

With five minutes left, Cas tried to put the game to bed with another score which did not come, leaving the Rangers still with a shout of nicking the result late on. But a solid hit-up from the skipper Varley demonstrated just how badly the Fords were fighting to keep the lead and then the referee finally blew the whistle to call time on a pulsating Betfred Women’s Super League Group 2 fixture.

All the players on the field ran towards one another, along with the interchanges and fellow Tigers who did not feature in this match, all raced into the mass huddle of celebrating women who had just secured Castleford Tigers Women’s first victory in 2022. 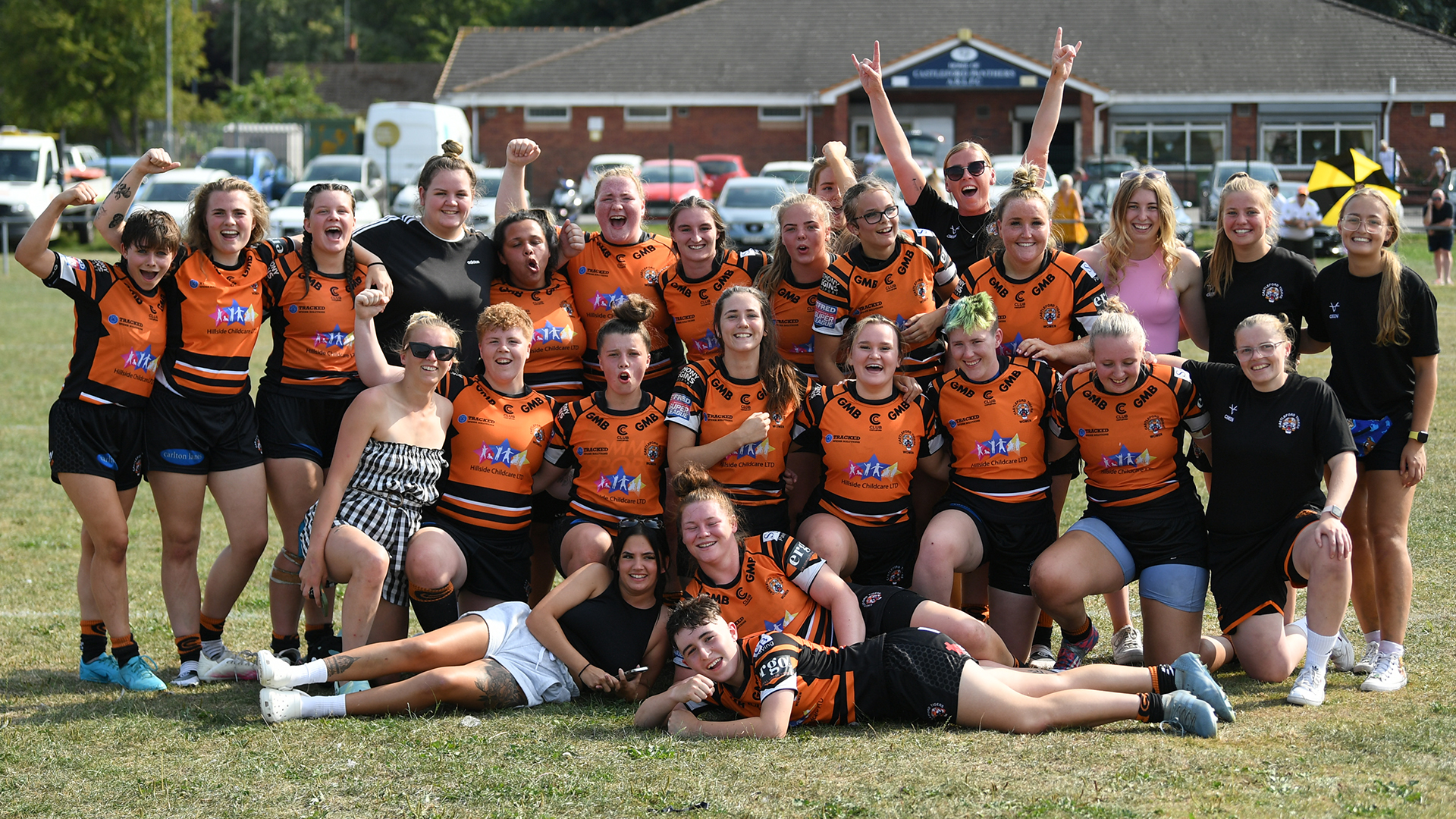