Read our match report as the Tigers beat Catalans by golden point! 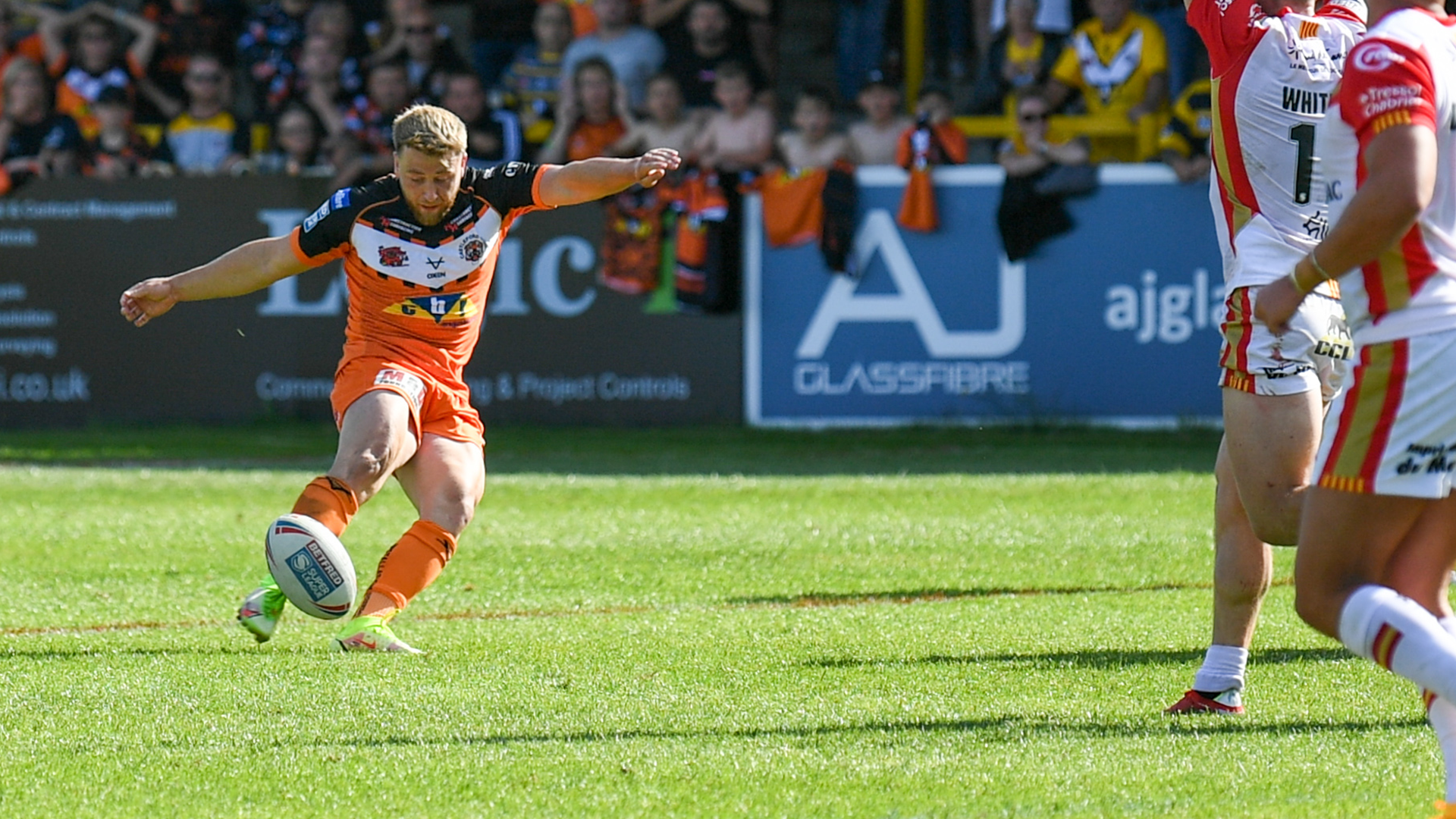 Castleford Tigers left it late to beat Catalans Dragons at The Mend-A-Hose Jungle on Sunday with half-back Danny Richardson slotting a dramatic drop goal in the final period of extra time!

Head Coach Lee Radford made two alterations from the Tigers’ victory at Toulouse last time out with Derrell Olpherts coming into the starting 13 in place of Greg Eden. Alex Mellor was selected at second-row for the 27-year-old to run out for his Fords debut after signing for the club in the week.

Catalans had the first sniff of the opposition try line in the opening minutes after Kenny Edwards was tackled into touch. Josh Drinkwater produced a typically devilish chip forward on the last, however, the Dragons were denied by a scurrying Ryan Hampshire who claimed the ball before getting himself out of trouble.

Richardson kept trying to force errors with plenty of high kicks into the wind, but it was the visitors who were forcing the issue in the opening ten minutes, having the majority of their possession in the Cas half. Although fortunately for the Fords, a couple of handling errors from the Dragons let them off the hook.

With 12 minutes on the clock, the away side were presented with another chance to attack after a penalty was given for dissent. England international Sam Tomkins attempted to jink his way to the line but some fantastic covering defence stopped him short before Catalans knocked on from the resulting play.

The handling errors from Catalans continued as just before the halfway stage a big chance at the Tigers’ line was coughed up after a 40/20 put them in prime position but former Cas man Mike McMeeken found the ball too hot to handle.

A high shot on Richardson by Matt Whitley in the middle of the field provided the hosts with their clearest sighting of the Catalans try line so far. Hampshire looked to have shrugged his way through the line but was stopped tantalisingly before he could break away. Castleford eventually then shifted the play quickly left with Mahe Fonua slapping the ball wide to Olpherts but the winger couldn’t quite make it to the line as he cut in from the sideline.

With 15 minutes of the first 40 remaining the home team had their second attacking opening in quick succession due to a six again call, however, they couldn’t make the most of it after Edwards was shoveled off the field with ball in hand.

Eventually, though the Tigers’ pressure told, and it was a beautifully placed grubber from Jake Trueman which was gathered by Cheyse Blair for the centre to dive over and open the scoring. The high winds provided difficult conditions although that didn’t seem to bother Richardson as his conversion kissed the inside of the post and over for the scores to read 6-0. 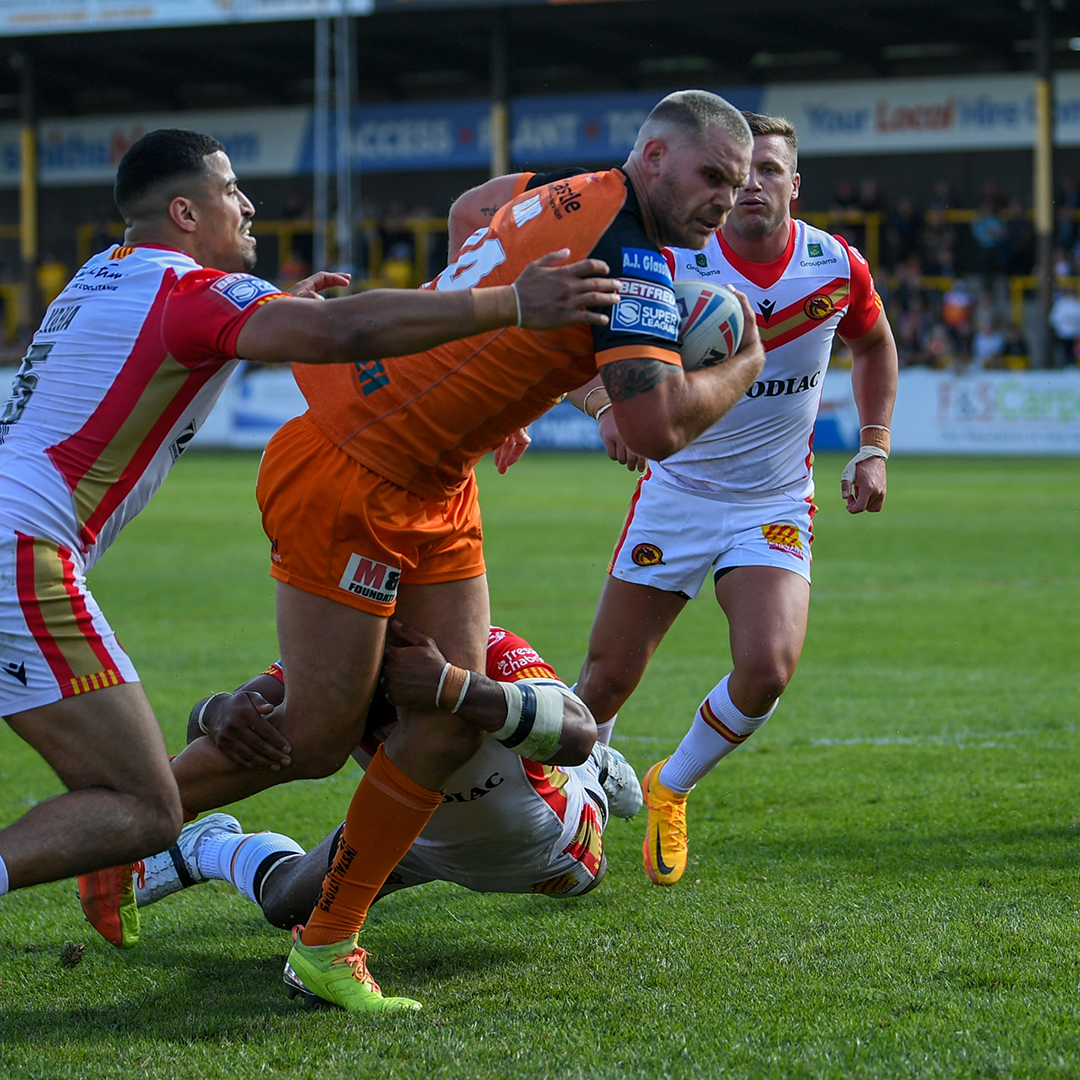 The Fords couldn’t hold onto their advantage until the break, however, with the hosts keeping Catalans out initially by forcing a knock-on but another 40/20 kick gave them the attacking platform. It was Michael McIlorum who put his head down to scoot over and Tomkins made no mistake from the tee to level the scores. Both sides then saw out the final few moments of the first half for the scoreboard to read 6-6 as the players headed into the sheds.

Castleford made the perfect start to the second half as they capitalised on a penalty 42 minutes in. Some fantastic hands from the Tigers as they took the play wide left, and it was Hampshire who turned on the pace to sprint over and put the Fords back into the lead. Richardson wasn’t successful with his kick on this occasion.

Just over five minutes later the visitors responded for the second time as an offside call against Cas got them up the pitch. Dragons full-back Tomkins took the ball on the final tackle and wriggled through as he cut in to smuggle the ball down. He then lined up the conversion but sliced the kick slightly wide for the scores to remain level.

Catalans tried to keep their momentum going as they pushed to get into the lead for the first time. A six again gave them the attacking base they needed, and Gil Dudson was stopped inches away from scoring. Cas’ goal-line defence was standing up well and it denied the Dragons again as Richardson caught a kick low on the last.

As the contest ticked towards the hour mark the Dragons grasped the lead they wanted as Joe Chan dragged his side forwards with a line break before centre Arthur Romano burst over from close range. Tomkins connected well with his conversion to give his side a six-point advantage.

Moments later the full-back looked to have created a try out of nothing with a chip and chase but couldn’t ground the ball.  The Tigers then went up the other end of the pitch and got themselves on level terms with 15 minutes to go in what was turning out to be a real back and forth contest. After Blair came close to his brace, the Fords then played the ball left for Olpherts to barrel his way over as he held of a couple of Catalans defenders. Richardson did brilliantly to slot the conversion to set up a grandstand finish.

A frantic final few moments saw Catalans spurn a late drop-goal attempt as they knocked forward at the play of the ball for the match to go to golden point. 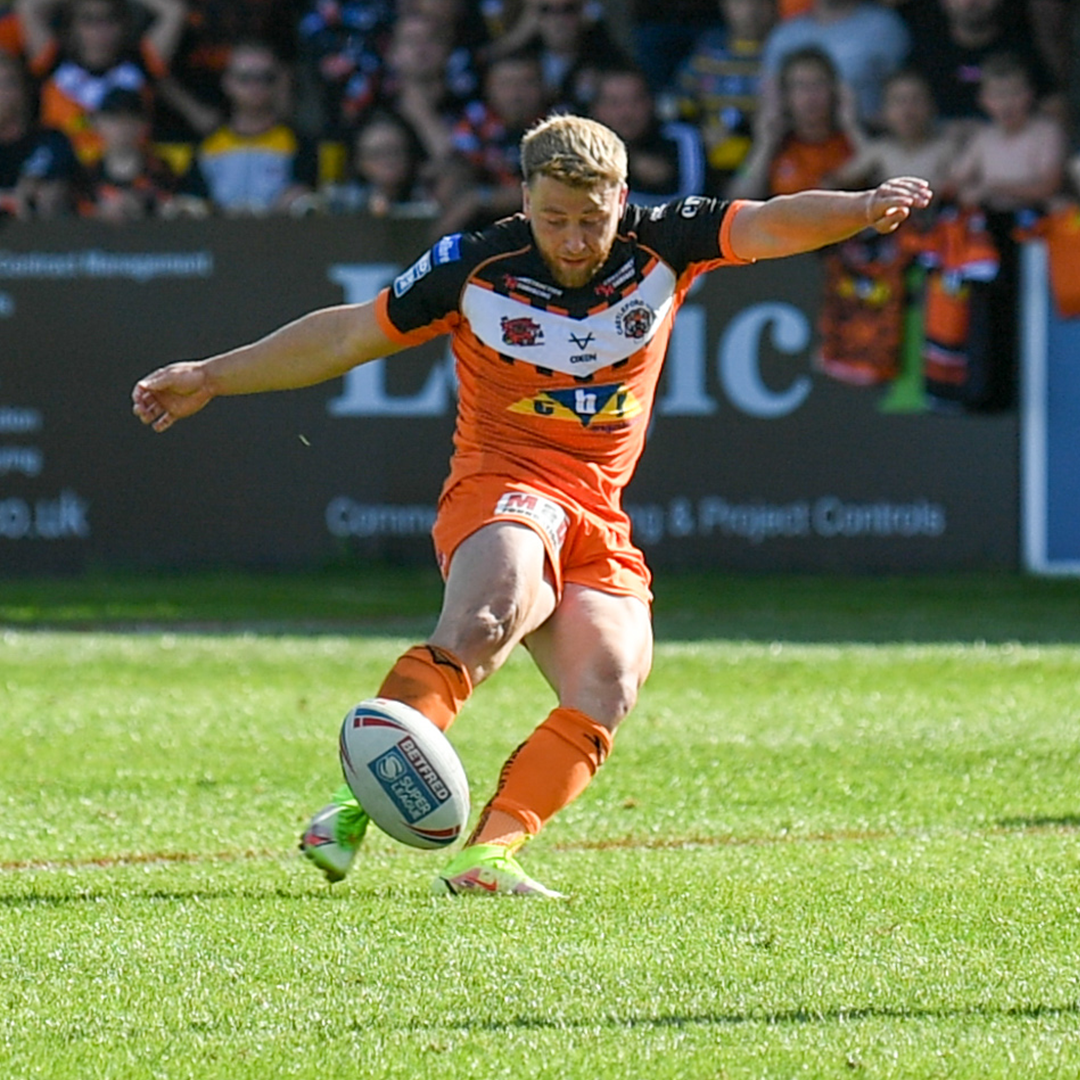 Drop goal attempts from Pearce, Trueman, and Tomkins went wide in the first period of extra time and Castleford’s chance looked to have gone with just under two minutes of the final period to go after Richardson’s kick was charged down.

However, Trueman pounced on the loose ball to give Cas another shot at clinching the victory and they did just that as Richardson stepped up and made his kick to send the Wheldon Road end into delirium!