A youthful Castleford Tigers Scholarship side battled brilliantly against St Helens but fell to a home defeat by 24 points to 44. 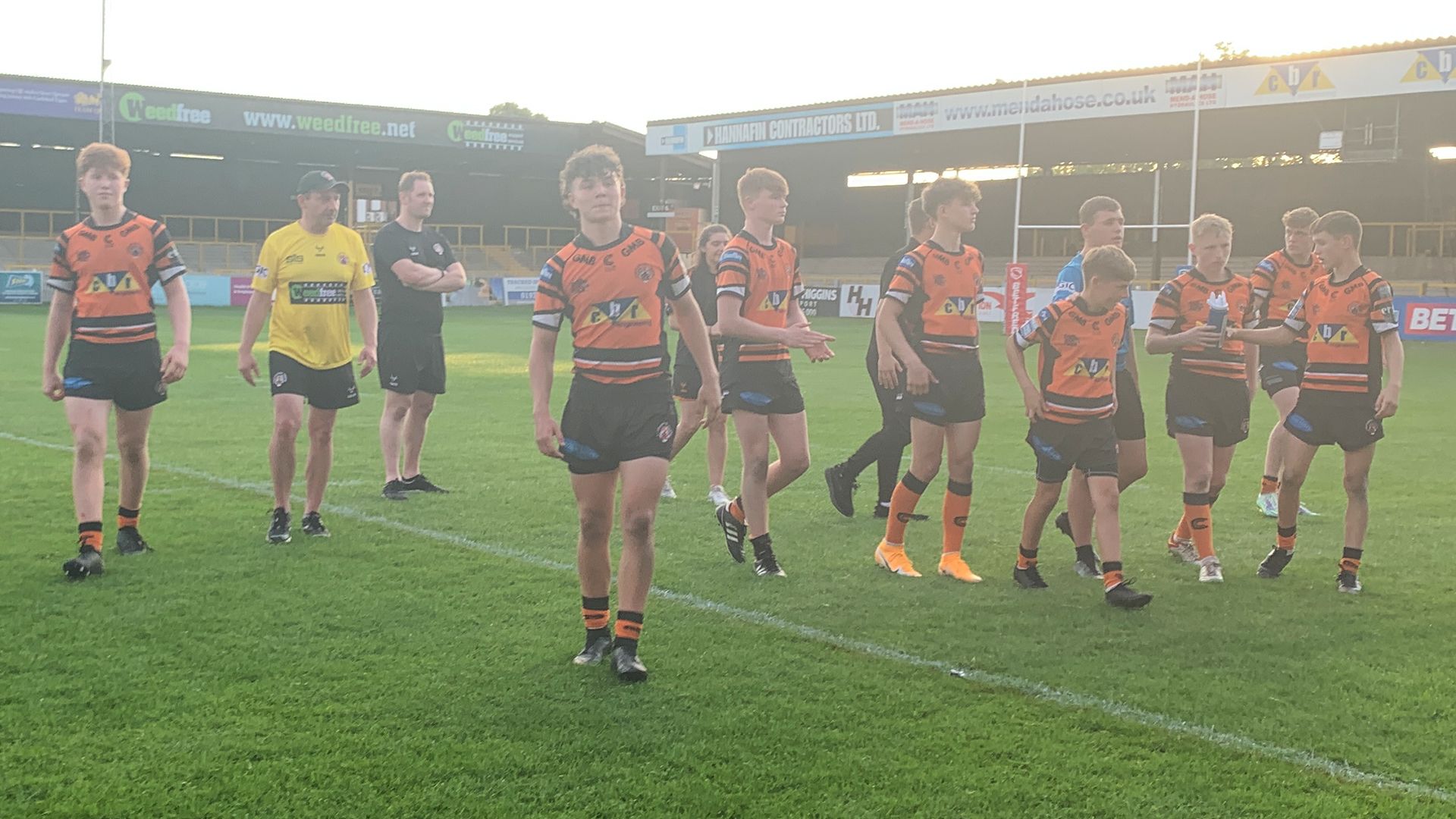 A youthful Castleford Tigers Scholarship side battled brilliantly against St Helens but fell to a home defeat by 24 points to 44.

With four debutants featuring in a predominantly Under 15s side, the Fords were left to rue mistakes they made in the first half which allowed the visitors to move ahead with a strong lead. However, Castleford did not go down without a fight with plenty of positive signs for our youth development side.

The game began in a bad fashion a straight knock-on by Cas from the kick-off allowed St Helens the early opportunity and build their territory and keep the Tigers pinned in their own half. The early defence looked good for the home side but in the fifth minute, the dam eventually broke with Jamie O’Keefe cutting inside and running towards the posts for Kian McGann to add the kick.

Castleford’s first major attack in the Saints half did not come until around 10 minutes in but they made them pay immediately with it, shaping up on the left edge James Potter made the most of a small gap to score on debut. The conversion by Wall was missed to level the game early.

The first of a sequence of errors which allowed Saints to build a lead was a frustrating one, after defending and keeping them out for a set on their own line a cross-field kick was knocked down and gave them a scrum 10m out. An initial first tackle was made in the left corner but O’Keefe in a tight short-side scoot grounded the ball, with McGann adding the kick from the wing.

Much like their First Team counterparts, St Helens’ line speed caused problems and an incorrect play of the ball by Cas inside the 20m zone compounded them. Reilly Cosgrove finished off a left edge play and another McGann conversion making it 4-18 just after 20 minutes.

Full of confidence Saints then has Cas on the backfoot, rolling down the middle and then driving on the right-edge for McGann to add a try to his points scored, but he did not make the conversion. The visitors then made it back-to-back scores after a Fords’ knock-on by the halfway line, Matty Penketh the latest Saints scorer with McGann converting for 4-28.

After dealing with so much pressure and defending set after set the Tigers finally got some relief with a knock-on at the restart. Only the second chance Cas has near the Saints line and they took it ably again, Fletcher Rooney pushing close to the line for Jenson Windley to scoot over for the finish. Alfie Wall added the conversion and began establishing a strong presence in the fixture. The Fords looks focused in attack and almost went back-to-back but a pass was just too strong on the left wing, a let-off for the visitors.

In the dying embers of the half Wall growing in confidence took on the line from 30m out, on the short right-hand side, dummied a pass and then fended his way to ground the ball, but he missed the kick to add further pressure at the break and the teams went in at 14-28.

It was another error that opened the scoring in the second half, Rooney was caught out by an early kick so charged back to stop the attack. On the next phase the ball got knocked on by the 10m line and from the following scrum, Penketh scored his second which McGann also tacked on the extras for.

Not to be too dramatic, but Castleford clearly showed they were well up for the fight and in one of the strongest tackles seen in recent years at The Jungle they showed that. The entire Main Stand felt it when Alfie Dale collided with a Saints player!

The game then moved into each side trading sets, both coming close to the line and both just lacking that final touch. Alfie Salmon showed a remarkable pair of heels to stop a big St Helens line break which they did not score on the back of. Debutant Travis Tennant fielded a difficult kick well and moved Cas out of danger.

As the hour mark approached Saints began giving away penalties and Rooney and Dylan Stones came close to drives over the line. Tigers followed it up with great line speed on the defence to cause a Saints error and Alfie Wall had acres of room and received a pass for his brace in the corner – adding the kick too.

Saints Scholars needed to find their groove again and an agonising late knock-on call by the ref meant they had two sets near the line to do it. Nathan Stafford finished off a passing play on the wing, but the conversion missed.

Ten minutes remaining, Saints held an 18-point lead but attempted a one-pointer which went under the crossbar from 10m out. Cas rolled to the other side of the field with Egley edging towards a score but no luck.

A nerve-settler, Saints with five minutes to go managed to make a line break which was kicked ahead, Austin Daniels collected it and fended off the late defenders for a converted try.

Arguably the try of the game came last with just three minutes left, Jay Seal lofted the ball high to the right corner, Wall caught it and had space to ground it, but instead, he threw it out to his wing-partner on the night Travis Tennant for a debut score in the corner. Wall couldn’t add the conversion quickly, with Cas then trying something from the restart but it wasn’t to be, and the referee blew his whistle.

A valiant performance from both sides, it was a highly entertaining fixture on a humid Jungle night, both will take plenty of positives from it, especially our young Cas players who showed plenty of spirit and battled throughout.