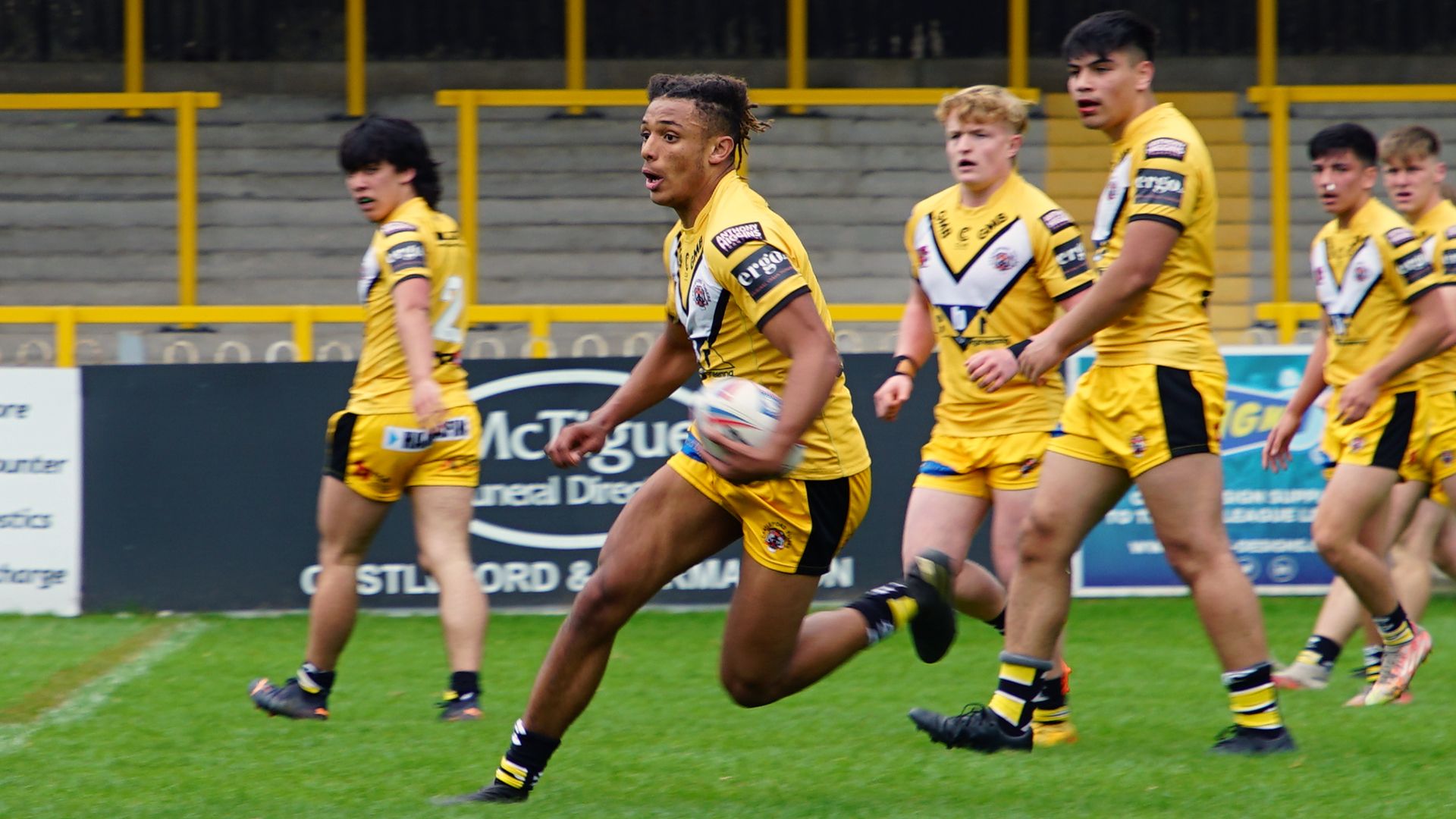 The Black & Whites put on a strong second-half performance to best the Fords at The Mend-A-Hose Jungle with former Tigers captain, and modern-day legend of Castleford, Michael Shenton on the sidelines giving out instructions.

Under the beaming sun, the visitors got off to a very strong start scoring the first three four-pointers. Callum Shaw opened up proceedings on the right wing when he made the most of a gap, Manoa Wacokecoke had his left winger to thank for a lot of hard work to get close to the line for a scoot-over score, before Denive Balmforth registered the first converted try of the game with a pick-up-and-go from 30m under the posts. Just after ten minutes, it meant that Chris Spurr’s youngsters were 14-0 down and needed to find their own foothold into the game.

Castleford made the most of a penalty to move into good field position, Callum Beety received a short pass near the line and the big prop grounded it to get Cas on the board. With spring now in their step, the Tigers seemed to shake off some early match nerves, typified by Calvin Sandhu chipping and chasing to keep pressure piled in the Hull half.

Aaron Willis made a big break on the left but was stopped just as he looked to give a pass inside. Moving the ball right the visitors made a play for an interception but knocked on in the process, allowing another attacking set. Halfback Leyton Davies kept looking to avoid tacklers as he took on the line and twisted just enough for an unconverted score making it 8-14.

Still turning the screw, Hull made an error which allowed a Cas attack and Alfie Mitchell near the line scored from dummy half with the conversion giving the Tigers the chance to make the game level, but it was missed.

Shenton’s charges then worked their way back into the match, with Castleford defending better than in the opening period of the game, a couple of close calls were well fielded, but the dam broke off another scoot play. A relative of Kirk Yeaman, young Finley Yeaman grounding the ball.

In the final minutes of the first half, Alfie Mitchell caught a kicked ball and juked to create some space and was vying to burst his way through, as he stepped Lennon Bursell the FC man stuck his leg out tripping the Cas hooker and received a sin bin for it. The Tigers made the most of the extra man quickly too, the ball was passed out to Hugo Nikhata on the left-wing. The ball bounced on the floor but he calmly collected it and raced 20m to dive in at the corner with two defenders trying to get him in touch but they couldn’t stop the impressive wingman. The kick would have levelled matters just before half time but it fell short and the hosts trailed by 16-18 at the interval. 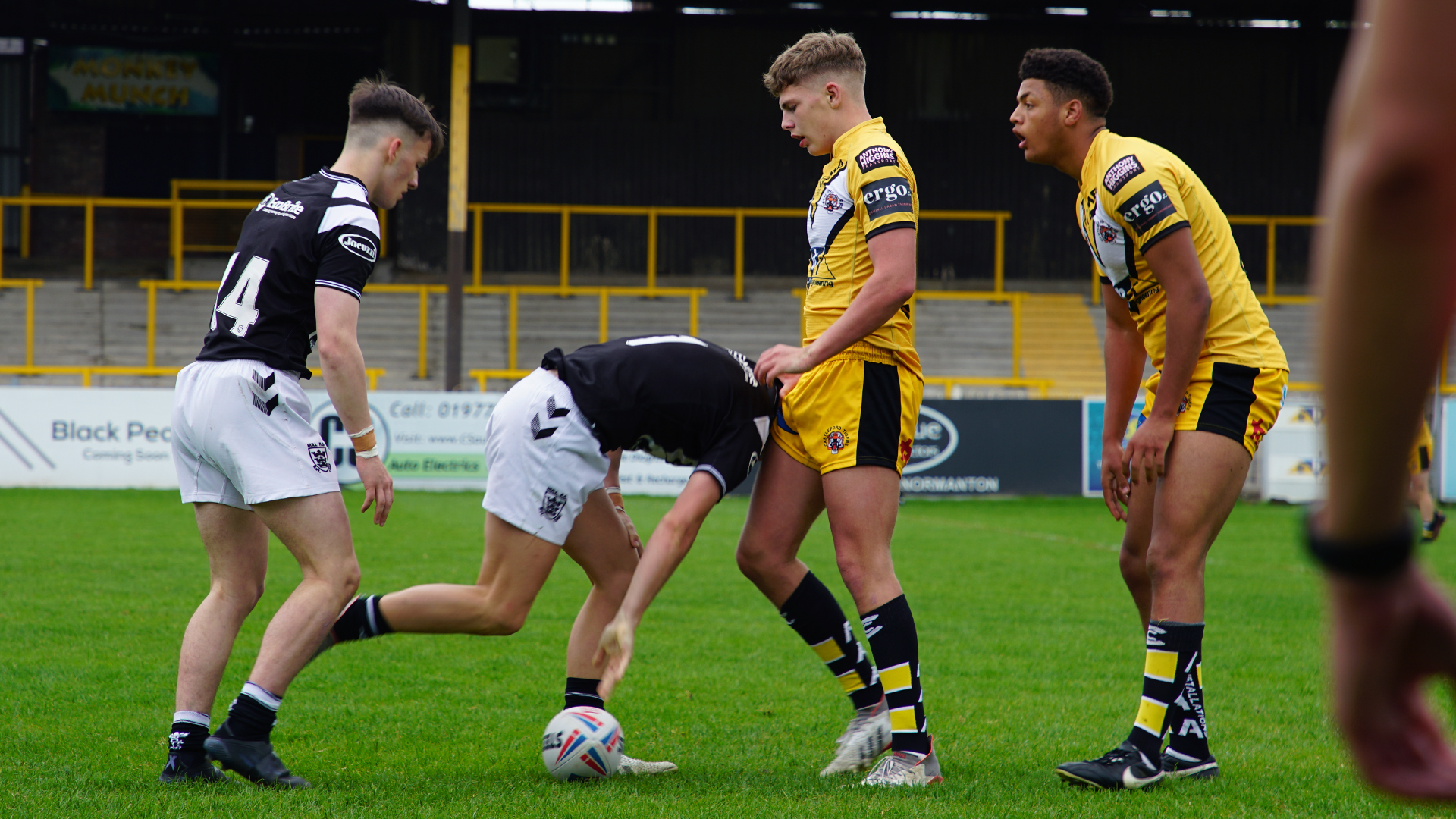 Hull FC began the second period a man down and Castleford wanted to make their advantage count. Mckenzie Coulson got on the end of quick break play on the Fords’ right-edge, he went into the in-goal area and claimed a try, but the referee judged it as a remarkable hold up from the visitors. However, the Tigers kept grinding before switching the ball from right to left and Tom Marris found a small gap, reached the ball out and scored the first try of the second half.

Cas led for the first time, but they did not hold their lead for long, Hull struck quickly back after a knock-on from the restarting kick, and Finley Yeaman again from the play of the ball scooted over to score and re-establish the Black & Whites lead with Medforth kicking the conversion for 20-24.

The Fords lost Nikhata on the left-wing due to what looked like an arm injury, but Sandhu stepped in his stead and tried twisting over in the far corner but was taken into touch. On the visitors’ next set Medforth spotted a gap near the line and was able to calmly ground it, his fellow halfback Harman added the conversion for a ten-point lead.

After the hour mark the Black & Whites began putting Cas to the sword, with the wind in our youngsters' sails appearing to go after some remarkable Charlesworth defence put FC on the backfoot, but Lewis Martin hit a terrific line and showed a clean pair of heels to go the length of the field and score. Martin in fact made it back-to-back tries, with a big gap on the left edge exposed for an easy pass and finish to make it 20-38.

Castleford gave themselves one last shot in the arm after two penalties moved them to the other side of the field, a much-deserved score from Calvin Sandhu came in the corner from a diving finish. However, shortly after Yeaman for the visitors scooted at the play of the ball once again and took the Black & Whites beyond 40 points scored. The final score of the fixture came from a left-edge play with Manoa Wacokecoke getting his second and the missed kick closed out affairs.

A disappointing second half from the Cas youngsters, but plenty of spirit shown in bursts but it was a strong performance from the unbeaten in 2022 Hull FC Academy outfit.