Cas lose out to the Red Devils

Castleford Tigers’ disappointing away form continued as they lost out to Salford Red Devils 30 points to 14. 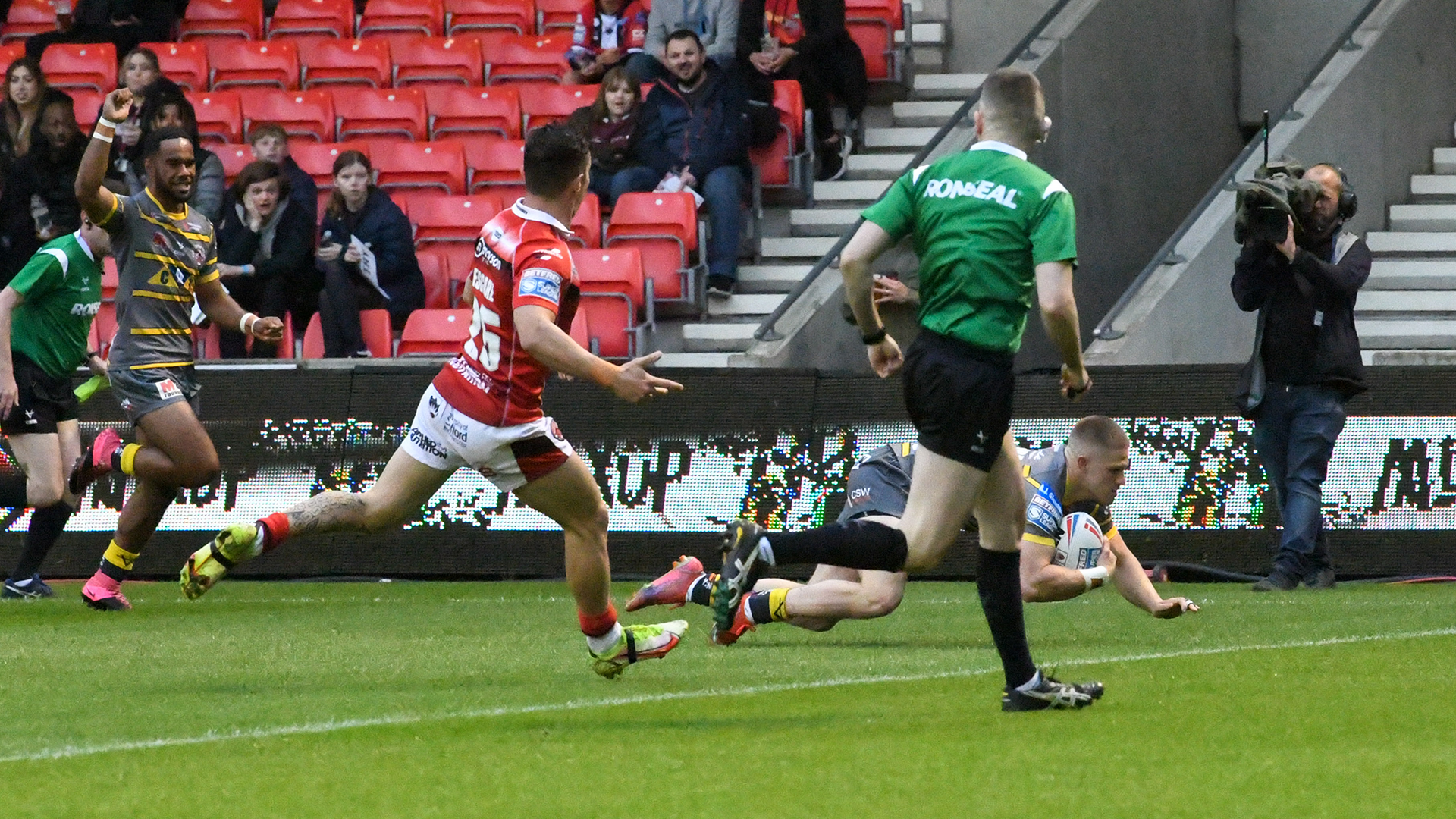 Tigers Head Coach Lee Radford made just two changes to his side who beat Hull KR last week. Daniel Smith stepped up into the front line after Liam Watts’ two match suspension and Cheyse Blair gained a spot in the Tigers’ interchanges.

Hampshire got the game underway, and Castleford were the first to show danger when they were gifted a set restart costly for Salford Red Devils in the middle of the field. Following a well worked set reaching the Salford ten metre line, some fine halfback work through Jake Trueman and Gareth O’Brien found space for Ryan Hampshire who claimed his first try of the season in Cas colours.

The first fifteen minutes were physically dominated by the Tigers both defensively and attackingly until Salford hit back with their own piece of magic. Following a Castleford offside, the Red Devils made strong yardage, just ten metres out, and once the ball came to Marc Sneyd his excellent short kick was pounced on by Tim Lafai. The #7 successfully kicked and made the score 6 points to 4.

As expected, the Tigers were fast to respond and as the ball was shifted from left to right and back again, the away side found themselves five metres out. An excellent short kick from Paul McShane was fantastically weighted but Morgan Escare spotted the danger and patted the ball out of play.

The Fords were persistent with their pressure and following a turnover ball deep in the Salford half, Tim Lafai knocked the ball on gifting possession back to Castleford. Gareth O’Brien decided to kick for goal tying the game up level.

Pressure shifted in favour of the Red Devils on the half hour mark as the home side were awarded a penalty twenty metres from the Cas line. A smart shift to the left into the hands of Tim Lafai drew the attention of Castleford’s right edge and when the ball came out to Joe Burgess, his step inside created space and the #5 went over.

The first half worsened for the Tigers as the Red Devils snatched the ball back in a dangerous position following Derrell Olpherts bundle forward in the tackle. Salford again, made use of their pace on the left edge and the exchange from Lafai to Burgess helped the winger glide over in the corner. Castleford trailed going into the break 16 points to 6.

After a below par first half from Cas, they reacted by coming out all guns blazing and began by tightening up the scoring within seven minutes of the second forty. The Tigers played the ball through their left edge and Kenny Edwards’ pass into space was perfectly run onto by Jason Qareqare who went over.

Momentum was building for the Tigers as they began to camp deep inside of the Salford twenty, however, a misplaced pass gifted possession back to Tim Lafai and his interception was the start of a fantastic set. Joe Burgess’ streaking run followed and was all but ten metres from the line were it not for a try-saving tackle from Castleford’s Ryan Hampshire.

Despite wriggling out of their own twenty on a number of occasions, Castleford carried on pushing the home side back. Following a well guided grubber kick by Lawler near the line, Salford collected the ball neatly and alleviated all Cas pressure through a smartly struck Mark Sneyd 20/40 kick. The respective set resulted in a Salford penalty after a Castleford offside and Sneyd made no mistake in adding the extra two points.

The Red Devils continued to absorb Castleford pressure but countered their own danger with breaking runs this time through Andy Ackers who broke through the Castleford defence and was stopped by another try-saving tackle by Hampshire. Caught out, the Tigers’ defence were caught scrambling and Salford outnumbered their left edge to which Deon Cross darted over unchallenged in the corner.

Ryan Hampshire stepped up for the following kick off and his low accurate kick came off the Salford defence resulting in a turnover ball to the Tigers. The next set was crucial for the Tigers and a perfect looping pass from Hamsphire to Qareqare was excellently finished by the youngster who carried three defenders over with him, claiming his sixth try in his last four games.

After looking like they were beginning to close the gap on their opposition, Adam Milner was sin binned for dissent and the pressure was back on the Tigers. Salford made full use of their extra man and fluid hands down the left edge saw Escare opening up a huge gap in the defence allowing Tim Lafai to perform a beautiful out the back ball to Joe Burgess who secured his hat-trick try. Marc Sneyd’s successive kick secured the Red Devils victory with a 30 points to 14 score line.