Three on the bounce at home for Cas

Castleford Tigers continued their impressive form at home by securing their third consecutive win after beating Leeds Rhinos 16 points to 14. 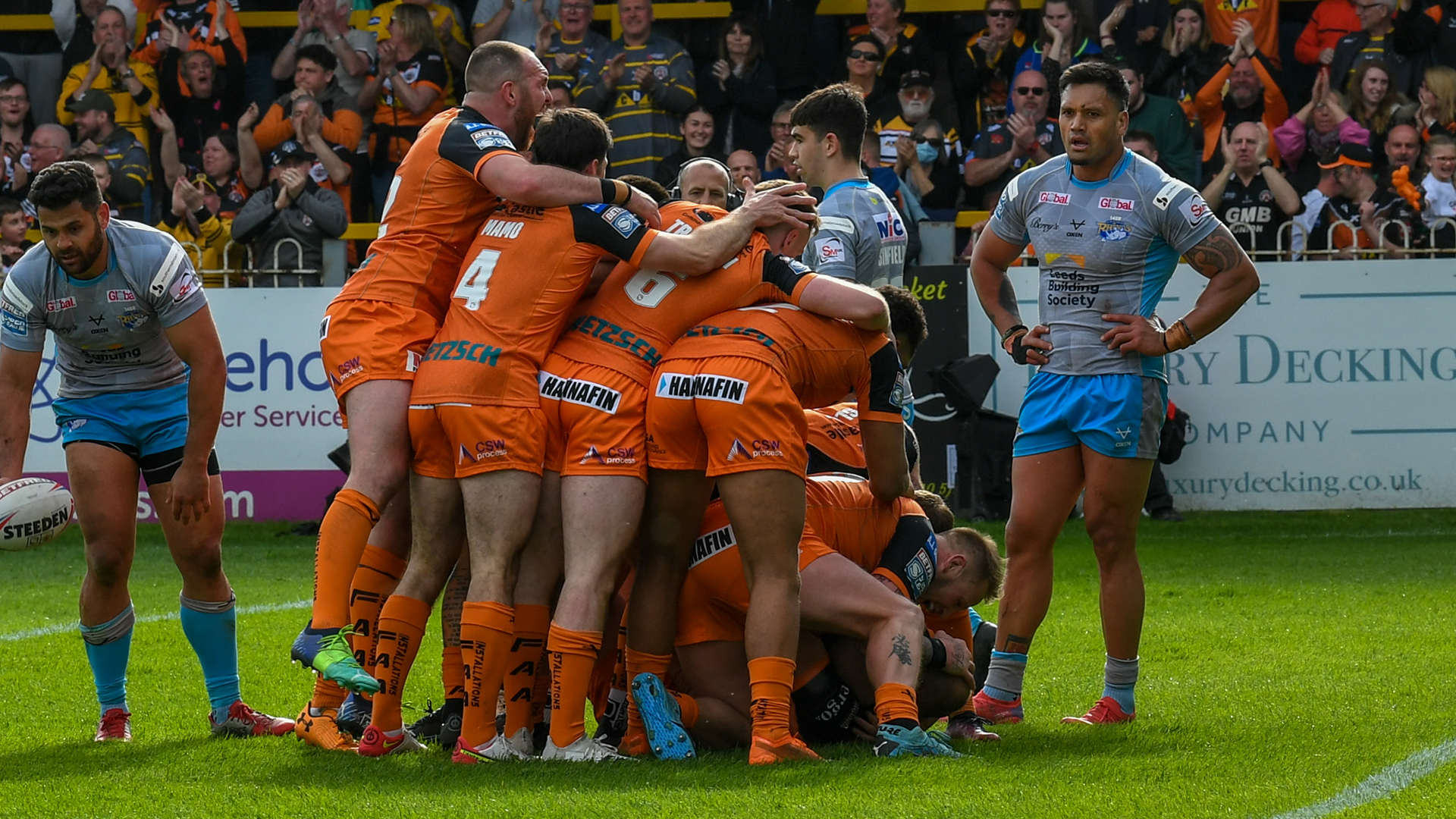 Lee Radford decided to make one change to his starting 13 who beat Wakefield Trinity last week. James Clare stepped into the fray in place of Greg Eden, whilst teenager Jason Qareqare and Tyla Hepi formed part of the interchanges replacing Suaia Matagi and Alex Sutcliffe.

Blake Austin’s right boot got the game underway, and it was the Rhinos who started the brighter. The away sides stand-off delivered a selection of intricate kicks that tested the Tigers defence but couldn’t quite find the right passage.

It was excellently responded to by the Fords who found the first breakthrough of the match. Following some slickness down the left edge, Kenny Edwards’ bulldozing run drew the Rhinos defence in and somehow released a pass to Clare whose inside step created a gap to go over the line.

Castleford ten minutes later extended their lead over the Rhinos starting with a bursting run from McShane that split the defence wide open. The skipper inside the opposing half passed the ball to the supporting Mamo who found Evalds as Rhinos’ Ash Handley came bearing down on the #1 just short of the line. On the last tackle, McShane directed an inch perfect kick to the right wing that bounced straight into the hands of Olpherts who went over unchallenged.

It became relentless by the Fords who mounded the pressure on the Rhinos. A high kick into the sun by Trueman was patted by Clare and seemingly fumbled by Bentley allowing Trueman to put the ball down. After going to the live video referee, the Tigers were denied their third try of the day.

Minutes from the half time whistle, Leeds gained more of a foothold in their play. Kruise Leeming’s short ball kick found a big gap in behind the Castleford defence, but some excellent covering by Evalds discounted any danger in that set. The following set Dwyer looked to carry out a dummy and dive underneath the posts but was met by three resilient Castleford defenders who held the hooker out.

It didn’t stop there for the Rhinos whose persistence paid off in the end. An apparent shove by Fonua inside Castleford’s twenty gifted possession over to Leeds and a kick that went inside the Fords’ goal line area was not dealt with and pounced upon by Martin. The #12 kicked over the kick that followed closing the gap up to two points.

Leeds began the second half as they finished the first and put the home side under pressure immediately. Youngster Jack Sinfield put through some delicate kicks that required serious concentration from the Cas defence as well as Leeming whose short kick under the sticks was well chased by his teammates but did not lead to points on the board.

Castleford continued to put pressure on themselves giving away needless penalties inside the Leeds half. Joe Westerman dropped the ball handing Bentley a free run for goal if not for some brilliant recovery play by Niall Evalds. The following play resulted in a Rhinos penalty after a high tackle from Nathan Massey and Rhyse Martin made the decision to kick for goal, levelling the scores up.

The Tigers began to let Leeds get back into the game and Olpherts’ block on Handley five metres from the line rewarded Leeds with a penalty and added pressure. Nevertheless, Castleford stood stern in defence and held out a constantly moving Leeds attack.

Momentum started to shift in favour of the Fords and a run of strong runs from the Castleford pack frustrated Leeds’ James Bentley and his reactive high shot on Joe Westerman resulted in a sin binning for ten minutes. A penalty was awarded to the Tigers in front of the sticks which O’Brien made no mistake in converting.

Gaps began to start appearing in the Rhinos line and Cas punished the man down deficit. By mistake of their own, Leeds dropped the ball near the halfway line and rewarded Cas with possession once more. An excellent weaving run by Trueman was stopped but on his way down performed a ball out of the back to Watts whose pace and power drove him over the line. Gareth O’Brien added the two extra points, extending the gap to eight.

Triumphant and back to thirteen men, Leeds were not dead and buried. As the minutes went down, gaps were formed and Martin’s fantastic interplay with Handley allowed the #12 to get his second of the day. A successful kick by Martin concluded the score that sixteen points to fourteen to the Tigers.