Two on the trot for Cas 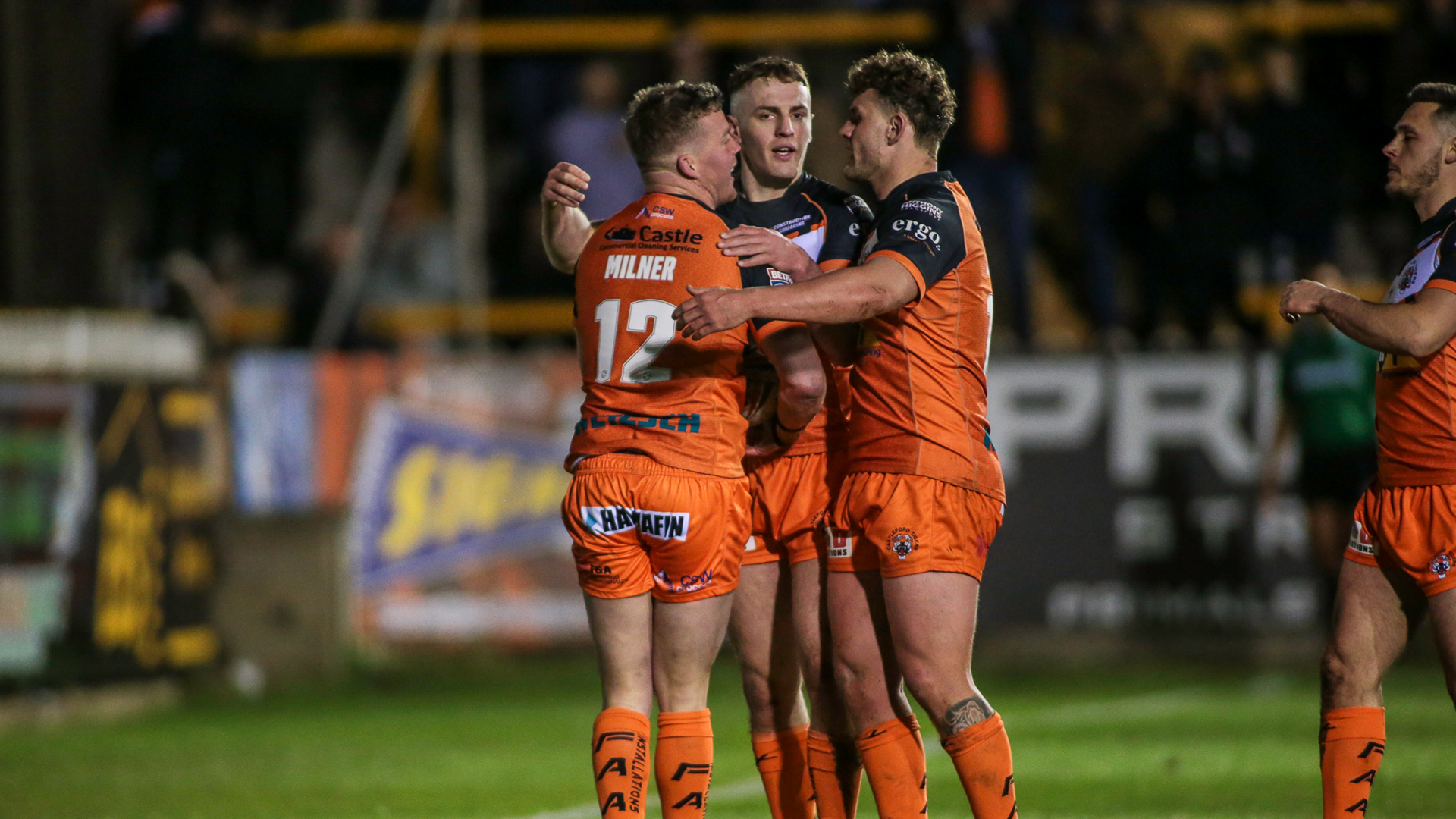 Head Coach Lee Radford made just one change to the starting 13 that faced Leeds Rhinos in the Challenge Cup last time out. Nathan Massey comes in for Daniel Smith who suffered a minor calf injury and Suaia Matagi stepped back into the fray as an interchange.

It was a special night for Jordan Turner as he reached his 300th Super League appearance – a milestone that reflects his hugely impressive career spanning sixteen years.

Tony Gigot‘s kick got the game underway and the two sides traded faultless sets early on, testing one another’s resilience in defence.

Toulouse were the first to get a sniff of the opposition’s try line following a six again call on the halfway line. A high cross field kick from Gigot directed to the right was patted forwards by Guy Armitage breaking down the play and turning the ball over.

The Tigers did respond accordingly through Faraimo whose explosive run broke through the tackles of Toulouse’s left edge. Just as the Cas fans were rising to their feet, the wingers pass to the supporting Evalds was ever so slightly behind the full back terminating the phase of play.

Olympique started to threaten on the break and asked questions from the home side. Whilst the French-side began to look increasingly dangerous, a mistimed pass was intercepted by McShane and Castleford gained possession. Repetitive pressure put Toulouse under the cosh and a slick from phase from Evalds, Turner and finally Eden providing the #23 with his eighth try in five matches.

After absorbing some persistent Toulouse pressure, Castleford returned some of their own at the other end of the field. An improvised, and seemingly unfamiliar kick from Eden five metres out fell delightfully in the hands of Evalds who went over unchallenged. Gareth O’Brien made it two from two.

Three minutes later and the Tigers added an extra two points to their tally as Kenny Edwards was illegally tipped onto his back illegally rewarding a penalty to the clinical goal scorer O’Brien making it 14-0.

It didn’t take Castleford long to extend their lead moments through some fantastic offload work from Watts to O’Brien who found the supporting Milner who marked his first Super League appearance with four points. O’Brien made no mistake in slotting the ball through the sticks.

The travelling side did respond on their right edge where the ball was shipped out to Ashall-Bott, but his juggling act of the ball was knocked forward.

Castleford looked as though they could have been in again on the brink of half-time. Some excellent fluidity shown on the left edge from Turner and Eden looked too go to be true as it was halted following a forward pass. 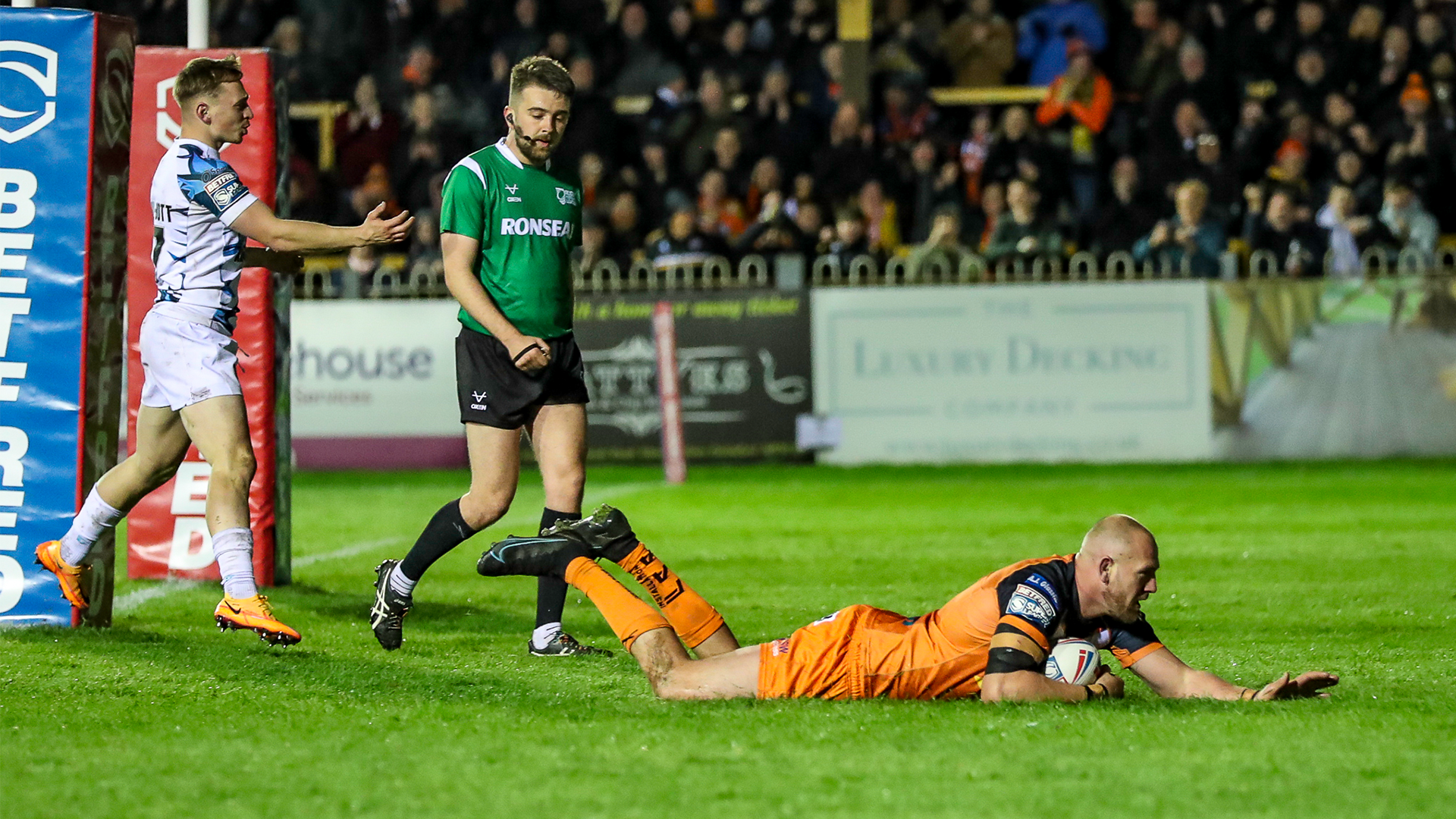 The second half began through the kick of Gareth O’Brien and the next forty also welcomed the dynamic Mahe Fonua onto the field who replaced Greg Eden.

Castleford began to get their noses through inside the opening seven minutes of the second half. A bursting Trueman run ripped apart the Toulouse defence and his inside ball to Watts fell just five metres short of the line. Without rushing their plays, the ball was dished out to to back to Evalds whose excellently timed pass to Mamo was darted over the line.

Bulldozing runs through the Toulouse defence was becoming a constant and it was Turner’s turn next. The #3’s bursting streaking through the Olympique defence gained over thirty metres but his pass to Trueman was again mistimed and Ashall-Bott was able to make the recovery tackle.

Just before the hour mark, Castleford added to their lead. Fully deserved of its plaudits, Watts was the next on the try list following his barging run that separated the Toulouse defence and the #8 completed his excellence through a swan dive over the line. A successive kick from O’Brien made it thirty-two points to zero.

Toulouse possession ramped up and the French side began to dominate the ball. Last week’s orchestrator Tony Gigot began to pull the strings and threaten Castleford’s resilience in defence. Following Gigot’s successful 40/20, the Tigers found themselves under immense pressure. Fantastic line speed however from Jake Mamo flipped the pressure onto Lucas Albert whose retaliated kick resulted in a ten-minute sin bin.

One minute from the end and Castleford’s resolute defence was finally broken. Persistence in the halves from Gigot was excellently exchanged and the French-sides star player sailed over the line. Chris Hankinson added the extra two points for Toulouse.

Castleford Tigers pick up their second Super League victory of the season in a dominant display against Toulouse Olympique.