The #NewCasEra for the Tigers Women has officially begun and whilst it did not start with a victory there are plenty of positives to take forward for the team and Head Coach Matty Faulkner. 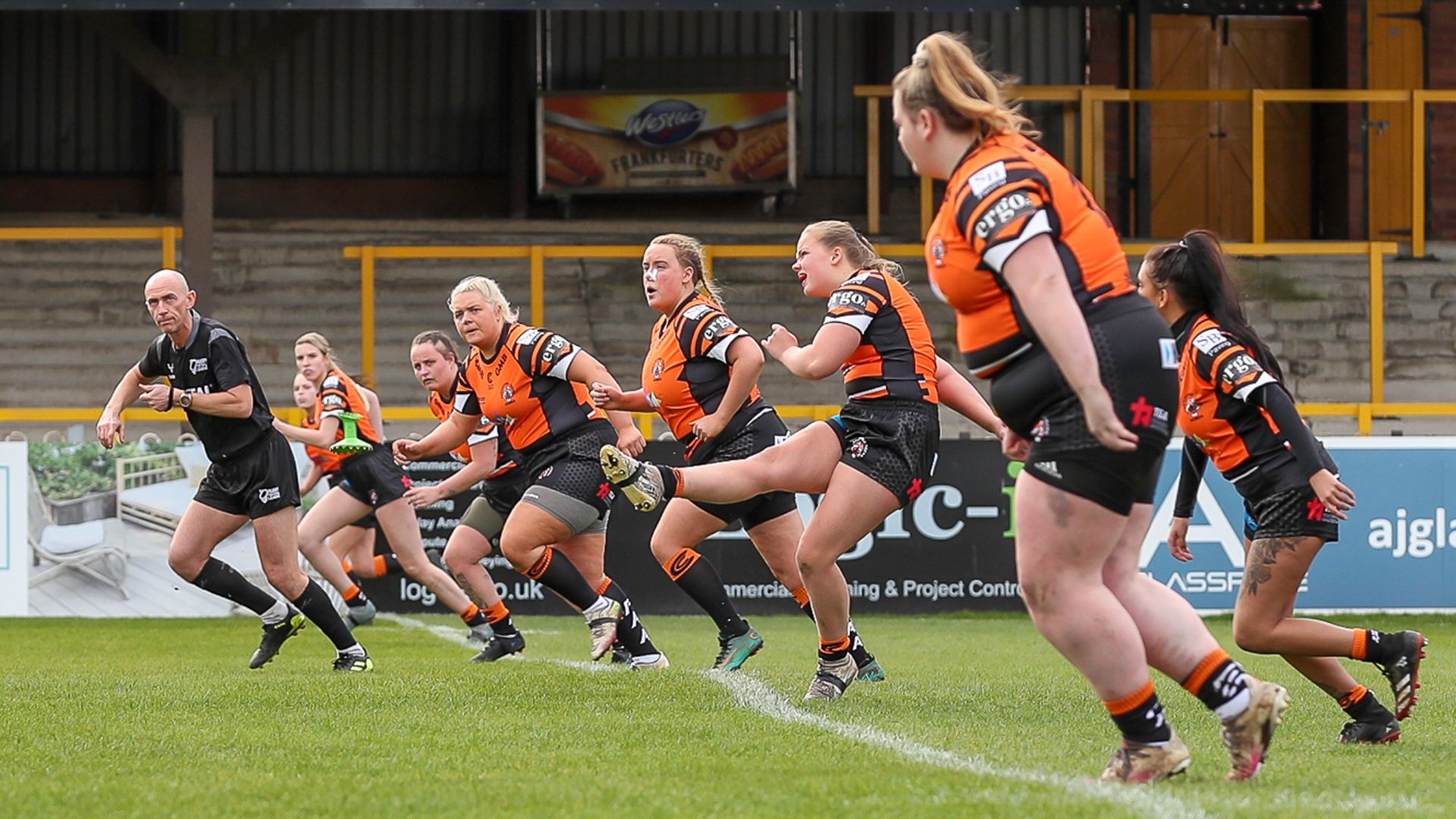 The #NewCasEra for the Tigers Women has officially begun and whilst it did not start with a victory there are plenty of positives to take forward for the team and Head Coach Matty Faulkner.

In the first of three Betfred Challenge Cup group stage matches, Castleford fell to a 32-10 loss against Wakefield Trinity Ladies.

Following a period of immense change with a whole new squad, it was finally time to see the Tigresses take to the field at The Mend-A-Hose Jungle and embrace a whole new chapter of the team which is only just beginning. Faulkner has bolstered his squad with young emerging talent and is keen to develop all his players into strong rugby league playing women.

Kaitlin Varley has shown tremendous heart to the Tigers, after a stellar breakthrough season in 2021 she wanted to stay with Castleford and was justly rewarded with the captaincy not only for that loyalty but her courageous efforts on the pitch. The fullback proudly led the team out for the first time with a healthy crowd of both Castleford and Wakefield supporters who were excited to see women’s rugby at The Jungle.

Trinity struck first showing the benefits of their two pre-season matches with lots of second phase ball moving them upfield, former Tiger Libby Priestley set up Kacey Davies to get the opener which Megan Preston converted. Castleford were slow to start giving away both a knock-on and a penalty to gift Trin a set next to the line and allowing Abbie-May Millward to dart over from dummy half for a converted score. 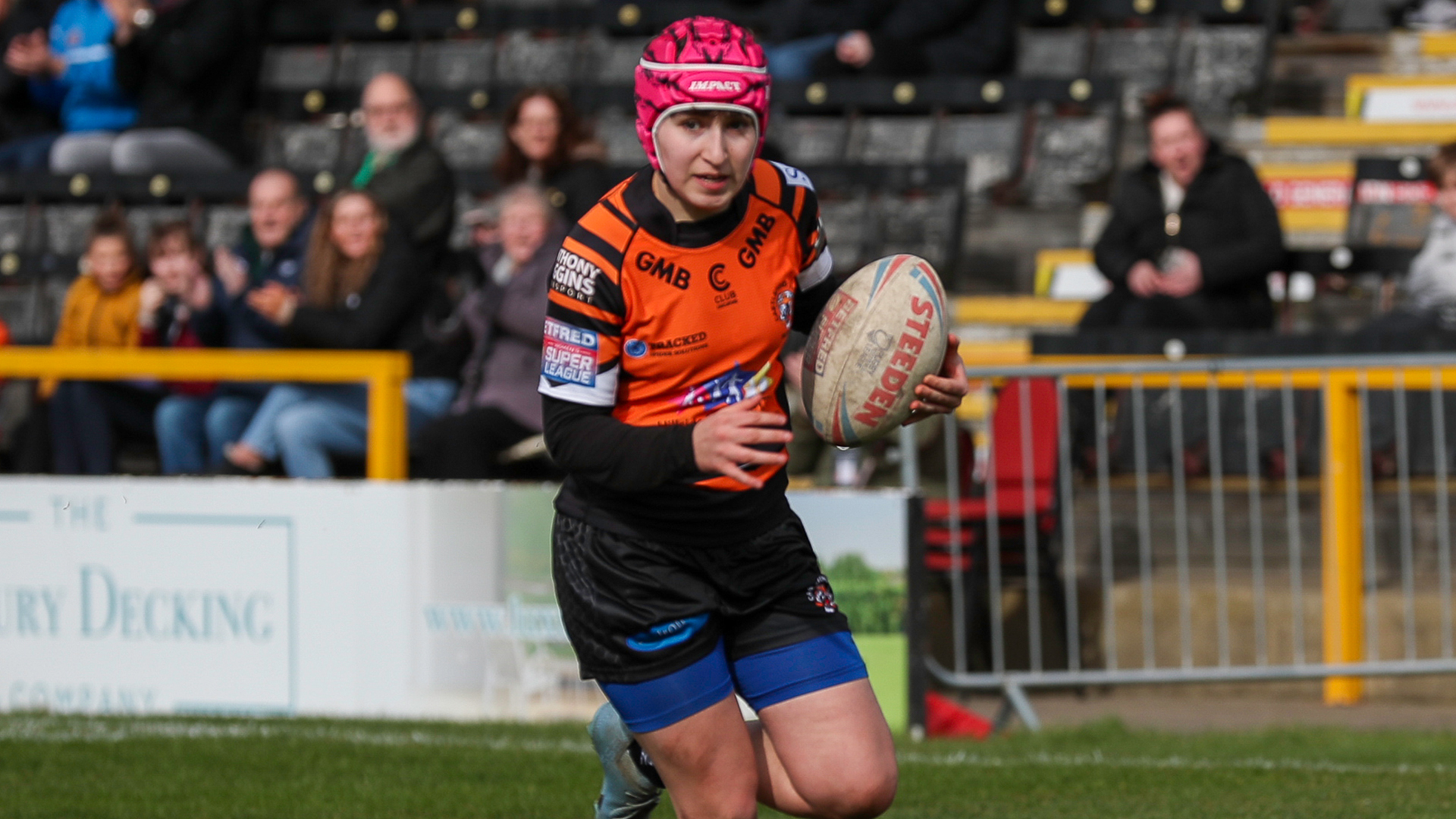 The second try seemed to kick start Cas, despite Wakefield gaining plenty of traction through the middle of the field the Tigers put on good defensive efforts to cause errors. Wearing her pink scrum cap Tally Bryer got the ball around the 40m line, shot through the defence off a dummy, stepped the Trin fullback, and planted the ball for a remarkable debut try.

Half-back Chloe Smith was on kicking duties but could not add the two from the first women’s try of the #NewCasEra, but her passing and kicking often created chances for Castleford that you would imagine will get finished more frequently in time. Verity Randall was staunch in her physical efforts, with Cas looking to strike back-to-back but forcing a goal line drop out instead. It would prove to be a common theme through the game that Cas would pile the pressure on Wakefield but struggle to finish it off with points. 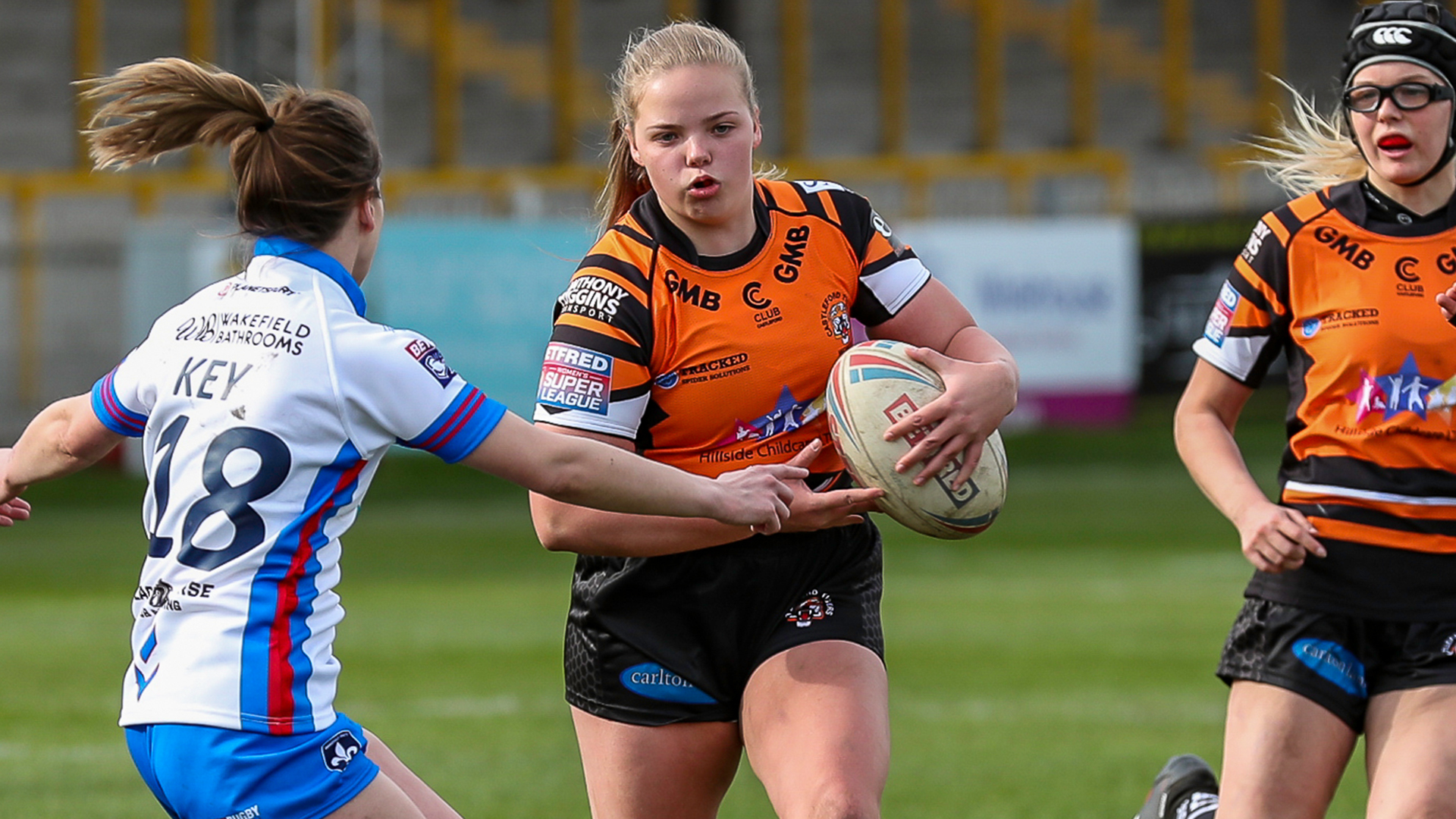 Centre Natalia Mia caused havoc with strong carries, one particular first half highlight being her carry from the Castleford try line to ease the pressure. However, Wakefield would strike again not long after a pause in play for an injury led to a line break, followed by a close-range barge over from Aimee-Leigh Wood.

Looking to fight their way back into the game before the break the Tigers played some lovely, eyes-up rugby but could not find that second score, Mia again with impressive carries trying to make something happen. Both sides traded errors and when Cas combined it with giving away a penalty the local neighbours another close-range try but this time from Lauren Harvey which Preston converted to close the opening period 4-22.

A good start to the half with Smith stamping more of her authority into the contest with big passes, and then a dummy of her own in a bid to cut to the line. Fellow halfback Imogen Coxon too seemed to be growing in confidence and provided excellent cover tackling.

There is no love lost between Castleford and Wakefield, and the needle in the fixture cranked up a notch when there was an altercation between Darcie Sloane and Libby Priestley. In stepped Cas vice-captain Leigh Powell who was clearly not happy about Priestley’s antics and let the former Cas player now, resulting in both Powell and Priestley being sent to the bin. 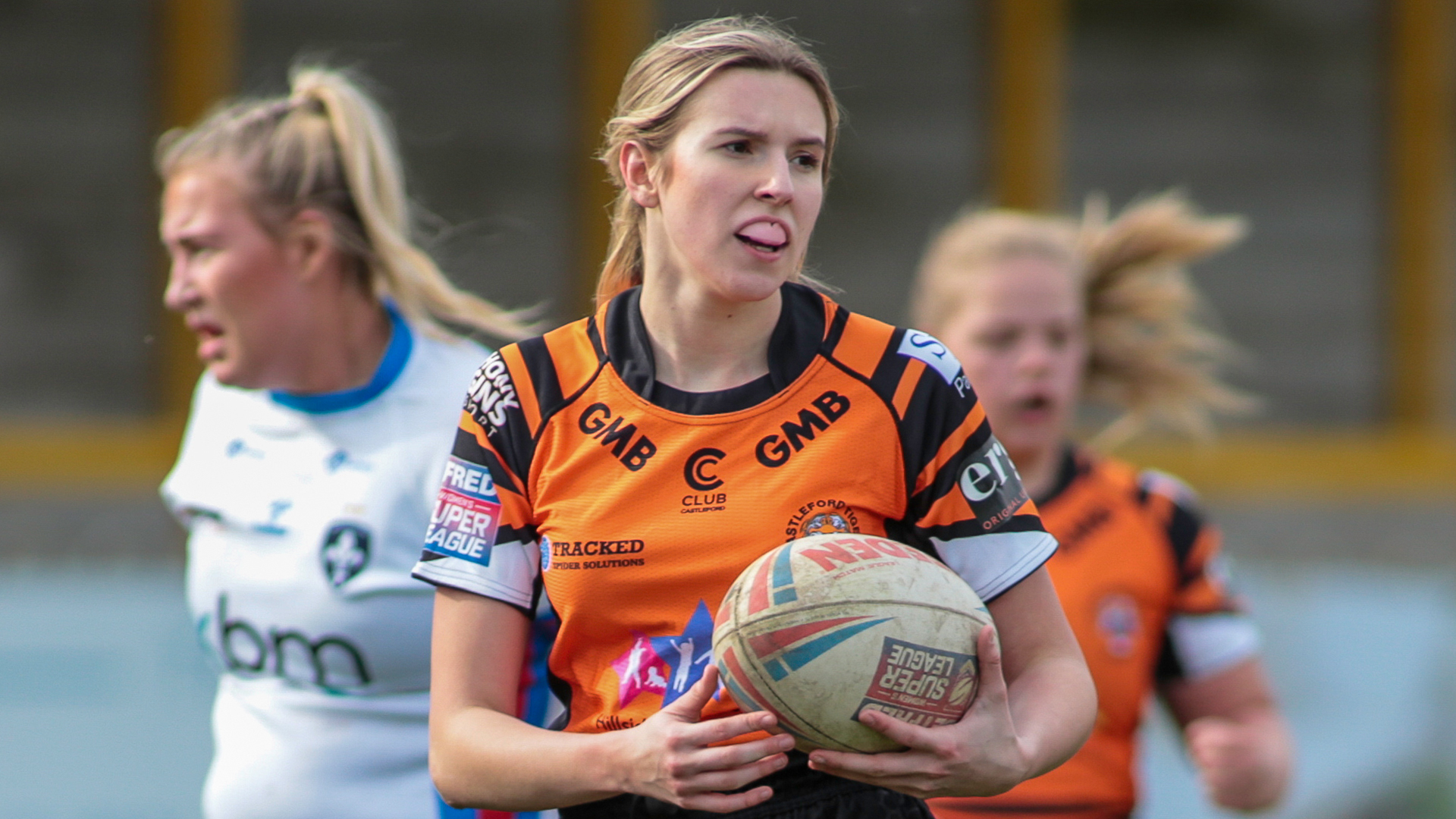 Bryer was trying to make use of the slightly more open space with terrific evading runs but errors for both clubs began creeping in. Castleford kept Trin out on their own line on a number of occasions and would work their way back upfield but again struggled to find that scoring touch for large periods of the half.

Just after the hour mark through their sustained pressure on the Wakefield line finally paid off, with Verity Randall getting a justly deserved debut try off a short ball from Bryer 10m out she bested three Trin defenders to score under the posts, Smith add her first two points as a Tiger too to make it 10-22. 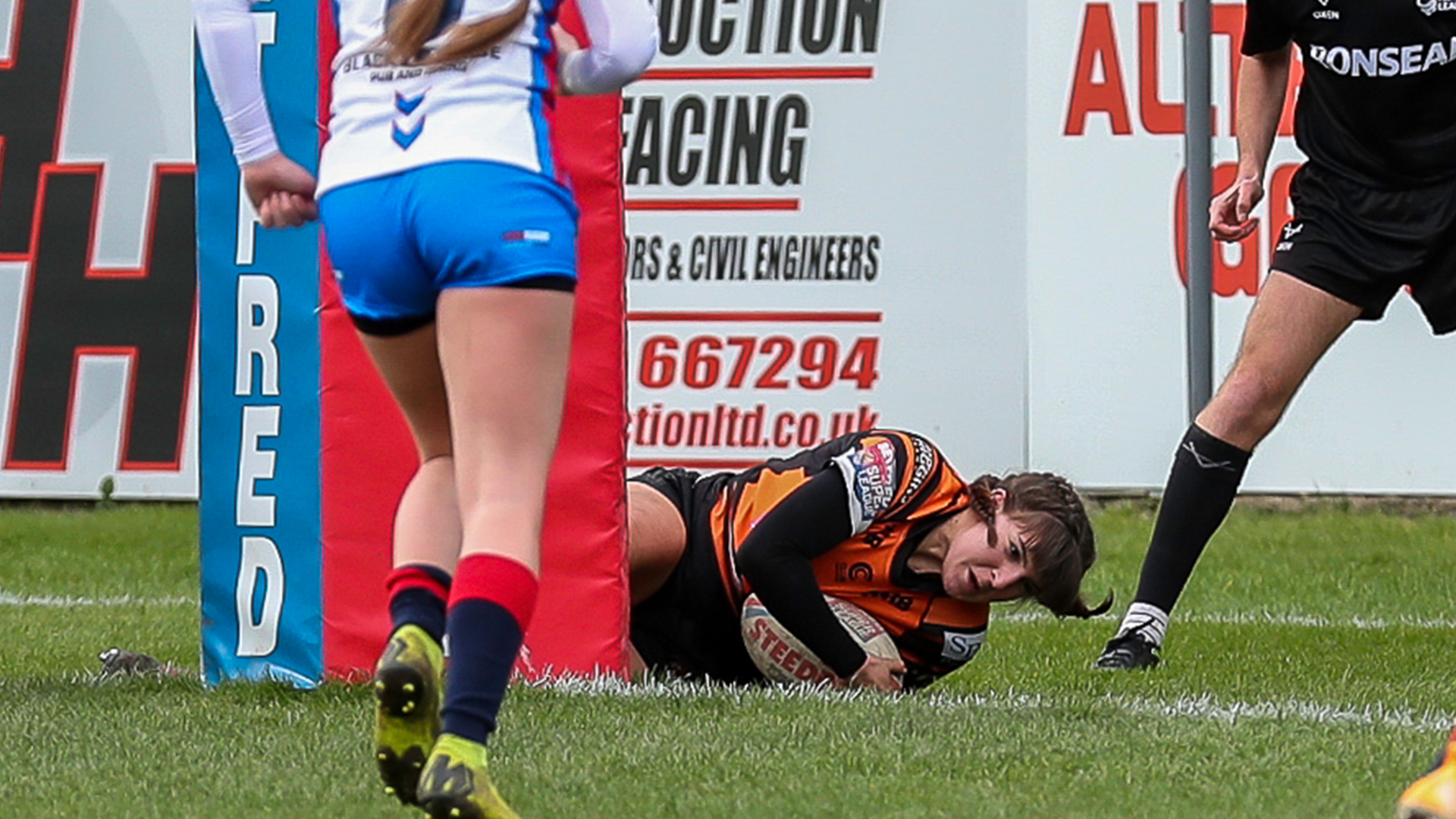 With 15 minutes remaining Castleford wanted to go apply more pressure, but from the restarting kick-off the Tigers were forced into touch. Cassy Lawson barged over for another short-range score which Preston converted to all but ensure victory. A Tigers error next to our own line cost heavy with Priestley too strong to be stopped for the final points of the match.

The Tigers begin the 2022 season with a loss, but with a whole new squad there were incredibly promising signs with unquestionable efforts across the team who took to the field. This was echoed by the Fords faithful who came to watch the match so stayed to applaud our side’s efforts in their first game in the #NewCasEra.

Up next for Castleford Tigers Women it is an away Challenge Cup group stage game against Oulton Raidettes on Sunday, 27th March.