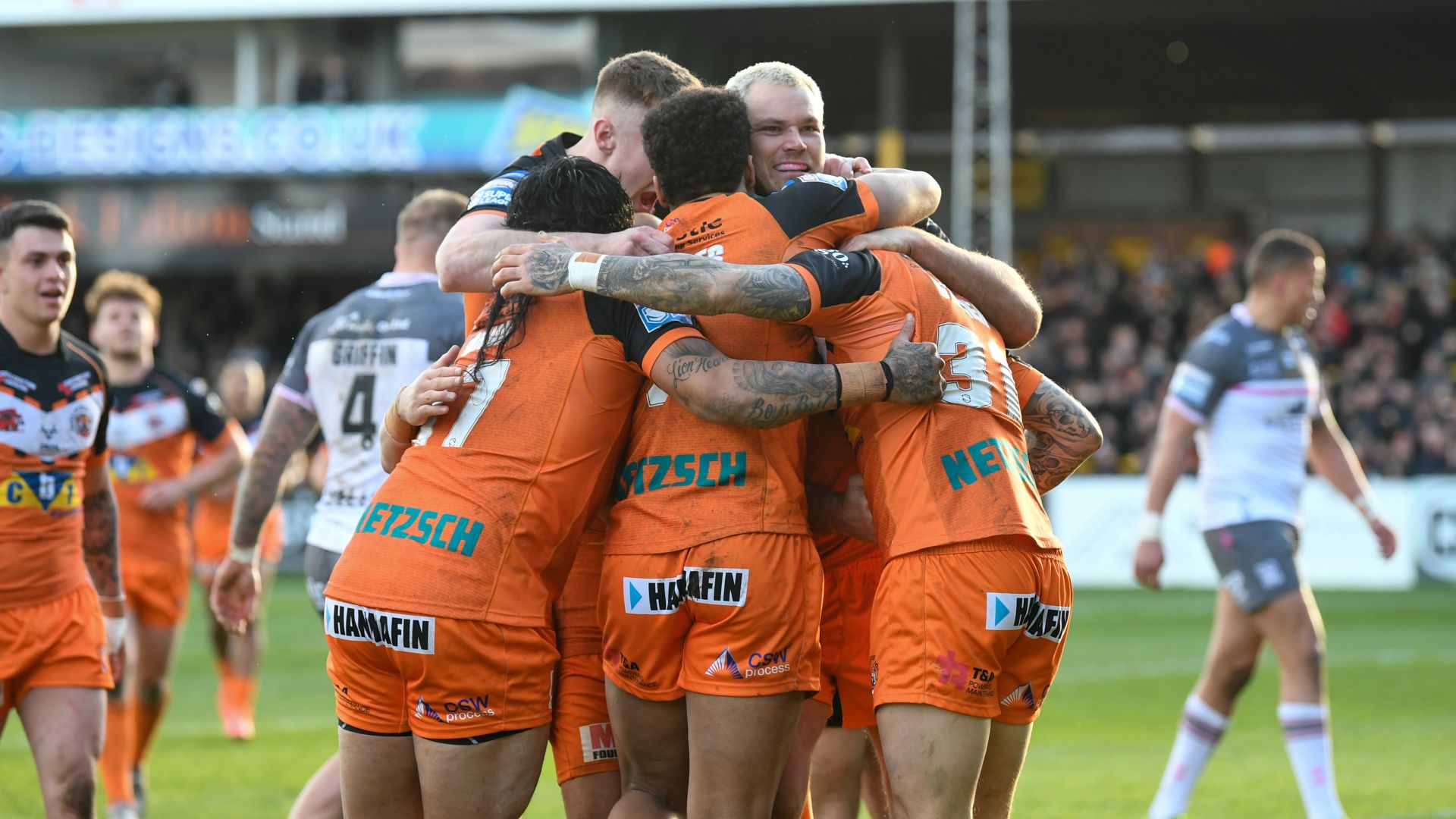 Head Coach Lee Radford made four changes to the starting 13 that faced Hull KR last time out. Greg Eden made his first Super League appearance of 2022 with Daniel Smith, George Lawler and Suaia Matagi stepping into the fray once more this season.

Gareth O’Brien got the game underway with a high boot to Connor whose short pass to Ligi Sao was fumbled straight into the hands of Smith who went over with ease. Gareth O’Brien made no mistake in front of the sticks.

Hull FC didn’t hang around responding accordingly. A well worked moved down the left edge was unexpectedly passed to Griffin who dropped the ball inside Castleford’s ten metre. A good pick up from Fonua was exchanged to Olpherts whose bursting run was halted by a dangerous Josh Reynolds tackle.

Pressure continued in the favour of the Tigers as a chased down kick by Trueman rewarded Castleford with possession of the ball. Following a strong completed set, the Black and Whites’ skipper Danny Houghton was dismissed for ten minutes after a high tackle on Paul McShane. The Tigers decided to kick for goal which O’Brien successfully converted.

Shortly after, there was a fantastic break from the Fords started by the newly introduced interchange Hepi who broke through the FC defence. A fluid offload by the #19 found itself into the hands of Lawler whose consecutive set of pirouettes opened up space ten metres from the away team’s line.

Hull FC began to gain more of a foothold in the game and some quick hands along the left edge to Griffin looked all but in were it not for a resolute piece of defending by Olpherts.

Hull FC carried on knocking at the Castleford door with Savelio and Houghton whose excellent interchanges in the form of an inside ball allowed the visitors’ captain to go over unchallenged. McNamara kicked the ball through the sticks closing the gap between the two teams at 8-6.

On the last tackle, the Fords worked the ball out to Trueman whose short grubber kick was ricocheted forward off Reynolds, collected by O’Brien and shipped out to the ever-dangerous Eden who powered over the line despite pressure from Connor.

Connor kicked ball out on the full turning the ball over to Castleford. Following O’Brien’s kick, the Tigers began their set 20 metres from the Hull try line. It was this time worked down the right edge, passes exchanged by McShane to Trueman and finally to Blair who went over. An excellent kick from O’Brien helped extend the Fords lead to 18-6.

An almost identical set of events followed but this time in the favour of the Black and Whites. Connor’s spiral kick from the tee was dropped by Olpherts and McNamara’s dynamic run opened up space for Griffin who charged over. McNamara was accurate in front of sticks tightening the game up to 18-12 going into the break.

A bright start to the second forty minutes by the home side. A consistency in pressure first down the left edge created space for Eden and on the final tackle McShane’s high kick to Connor was pounced upon by the Castelford pack. Following a goal line kick, the Fords came back once more. The set from Castleford was thrown down the right edge to O’Brien and an excellent weaving run was raced over by the full-back.

Hunger for the next try continued and it was the Tigers who claimed the next set of points. From the ruck underneath the posts, McShane flung the ball out to O’Brien and his wide pass to Eden was timely run on to and powered over in the corner.

A repetition of needless penalties helped the away side claw their way back into the game. Following an offside, the Fords were then penalised for a ball pat by youngster Sam Hall ten metres from their own line. Fluid hands were exchanged down the left edge of the Black and Whites where Griffin’s excellent timing granted Swift space to go over in acrobatic style. McNamara completed a difficult kick making the game evermore closer. 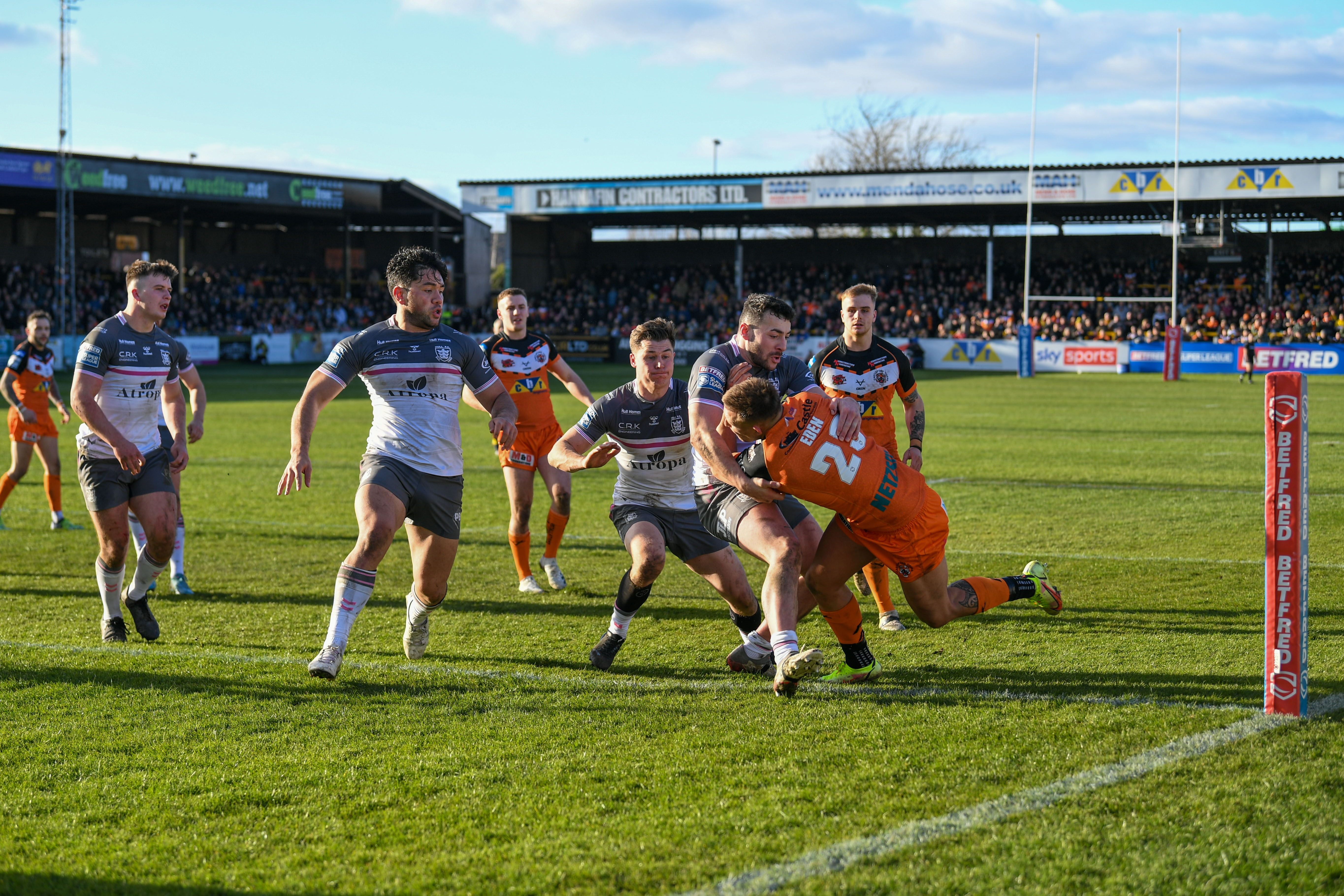 Momentum began to build for the Airlie Birds and their attacking play continued to look dangerous. The ball made its way out to playmaker Connor whose short kick was pounced on by Wynne in the right-hand corner. The unsuccessful kick from McNamara made the score 26-22.

Some fantastic end-to-end rugby followed Hull’s score and Castleford again responded well. A deep run from Turner broke through the Hull’s defensive line where the ball was offloaded to Sutcliffe and finally to Eden. A jolted run by the #23 was misread by Hull’s right edge and Eden dived for the line in the corner. O’Brien completed a successful kick from out wide.

In typical style of the game, the Black and Whites were the ones to reply. A six again call was capitalised on by Hull and Connor’s ball was distributed to Shaul on the right-edge whose electric pace took him over the line.

The match was seen out and the win secured through a Gareth O’Brien drop goal three minutes from time ending the game 33-26 and confirming Castleford’s first win of the season.