Castleford Tigers fell to a disappointing defeat away at Warrington Wolves 34-10 in Round Two of Betfred Super League 2022. 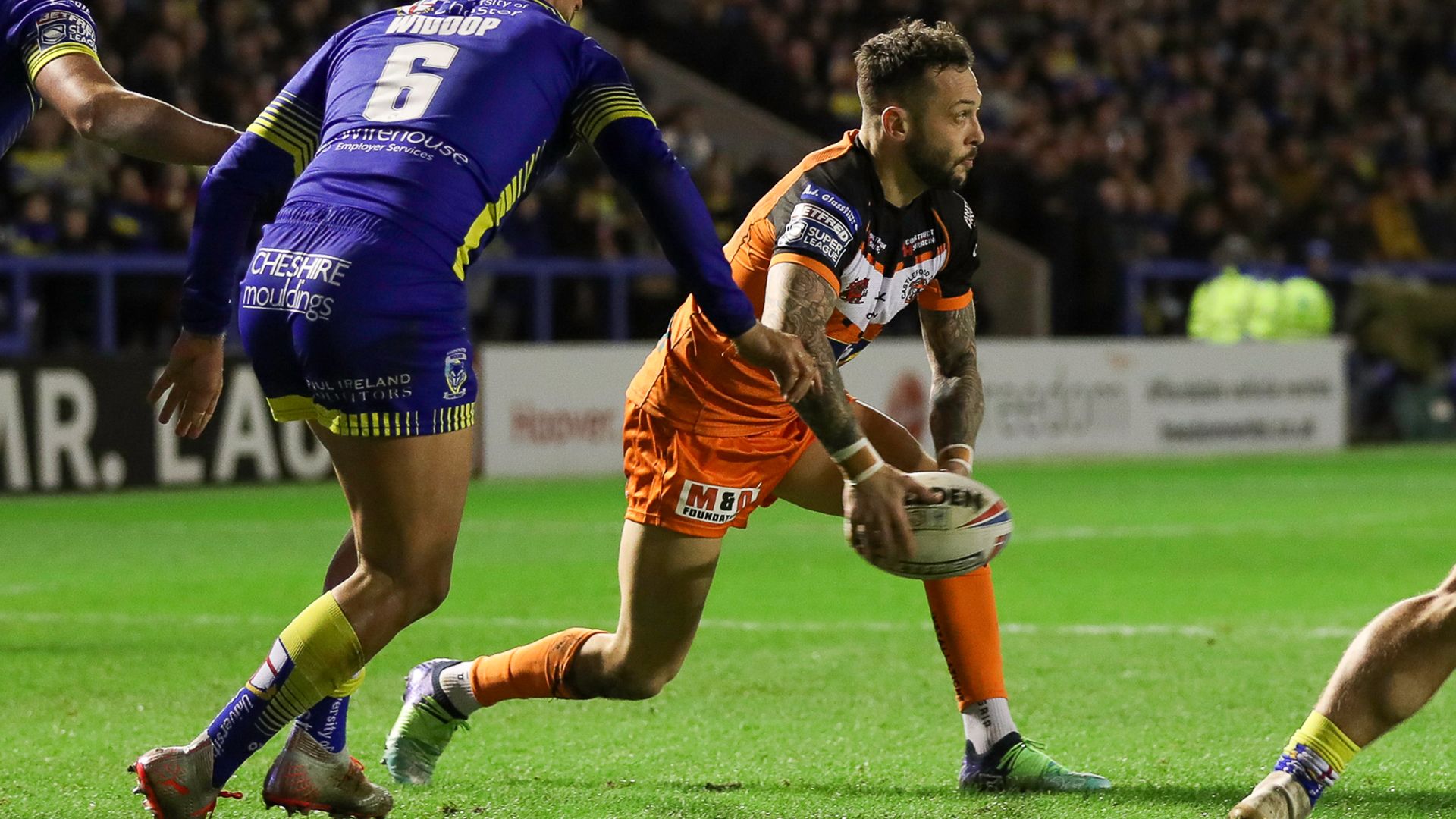 Much of the build-up centred around former Cas boss Daryl Powell coming against his former club in his first home league match as Warrington’s Head Coach, and it would be Powell who would be the happier coach come the end of the evening.

In perhaps a sign of plans not going as expected, the match ball was delivered by a young Wire fan mascot in a kid’s drivable toy car called ‘Whizzy Rascal’. Small problem, the kid forgot to stop and give the ball, but it eventually made its way for Stefan Ratchford to get the fixture started.

Great defensive intent was shown early with a high ball to the corner, Matty Ashton having to concede a goal line drop out after a great tackle from Bureta Faraimo, who’s bull-like power was demonstrated throughout the night. But just as Cas looked to make the Wolves pay early, the last tackle play was intercepted on the Wolves line by Ashton who raced the length of the field for the opening score and Ratchford tacked on the extra points with the kick.

Cas followed that with very strong runs in the middle of the field and pushed Wolves back onto their own line to end sets and kept Powell’s men pinned in their own half. Relieving penalties moved the threat though to the other end, and the second instance of an apparent stripped ball proved costly. George Williams near the line spotted a gap and went over for a four-pointer, Ratchford converting again to make it 0-12 just 15 minutes into the game.

The Tigers stepped up in their intent capitalising on a loose ball on the right edge after Fonua stopped Williams strongly. Cas moved towards the middle and a great dummy pass from Edwards almost paid off as he sprinted to the line but was tackled around the legs and judged for double movement, halting the Fords’ progress.

Warrington went looking for a third with a couple of sets next to the Tigers try area, including a six again call but strong Cas defence held them out under pressure at this stage. Both sides traded sets but neither creating a lot of fluency to their games, such as Cas finally getting a bit of luck with a penalty 40m out but Trueman’s grubber kick being well collected by the Wolves.

Wire had the Fords penned back on their own line but again as the half time interval approached, they did not breakthrough. Faraimo leaping highest to a corner threat, both Olpherts and Evalds taking the right option and conceding goal line drop outs and our forwards forcing Wire errors to quell the danger. But Cas still couldn’t break through at the other end either, the final play of the half saw Mamo push across field, pass to Edwards who threw a hit out ball to Olpherts who almost got the Tigers scoring their first points but no luck as he got swarmed into touch.

A head injury assessment for Jake Mamo meant Cheyse Blair stepped in at back-row and move Alex Sutcliffe out to centre, and Kenny Edwards with a calf strain saw George Lawler step back in to kick off the second period.

It was a perfect start to the second half with Cas pushing Wire to their own line, Blair with a strong carry near the line. Great Tigers passing to the left edge let Evalds hit Olpherts with the ball for a beautiful diving corner finish. The kick was just not strong enough in the stormy winds and went across the face of the posts by O’Brien.

On the back of the score though it was not good discipline by Cas, with back-to-back errors gifting Wire field position. Williams spotted a big gap at the back, but Olpherts raced to knock it out for a GLDO. Off the back of the restart Ratchford threw a long pass to Charnley who crashed into the corner for Warrington’s unconverted third try.

Castleford kept having the Wolves defence retreating but gifting them relief in the form of errors. It would cost again for the Fords, combined with soft defence near the middle Robbie Mulhern powered over to score from 10 metres out, and Ratchford added the easy kick this time to make it 22-4 with just over a quarter of game time left.

Cas as they had all game kept moving Wire back but struggled to finish it off with points. A Tigers set began near their own line and a misread of a pass allowed the loose ball to be kicked on and scored by former Tiger Peter Mata’utia, Ratchford adding the extra two points.

Another pushback from Cas finally paid off with O’Brien on the last doing a little chip kick which Trueman collected next to the posts to score our second try. O’Brien quickly slotting the conversion with 13 minutes left on the clock, but it was a disaster start to the next set though with Blair knocking on the ball on his own line from the kick-off, but Mahe Fonua made a crucial interception to stop the Warrington threat.

Castleford come close to scoring again with Westerman, McShane and Evalds linking up well but just held short. A loose ball shortly after was kicked forward by Williams and collected but Fonua made the tackle to stop him initially. Following a brief break in play due to injury Wire moved the ball close to the line on their right edge and a small Williams chipped kick to the corner is gave Charnley his brace.

The game ultimately fizzled out for the Fords who kept fighting with players doing much more minutes than was planned after interchanges were shortened due to the game day injuries sustained to Kenny Edwards and Alex Sutcliffe, the latter of which required a hospital visit.

As they had most of the night, Cas came up short in the dying stages trying to finish off their attacks with points to end a disappointing night at the Halliwell Jones Stadium.