Castleford’s 2022 Betfred Super League campaign began with a 16-26 defeat to Salford Red Devils at The Jungle on Friday night. 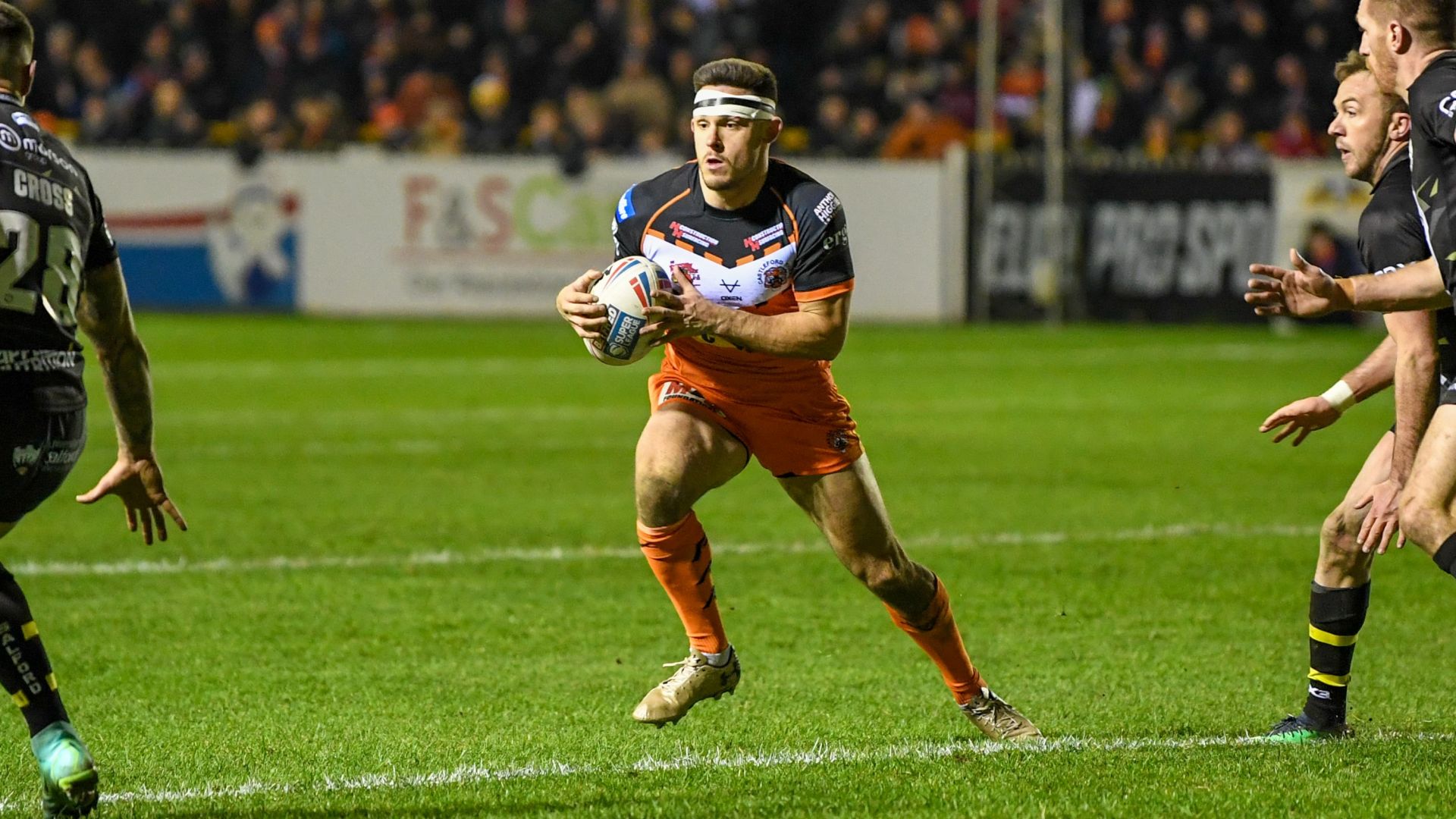 Castleford’s 2022 Betfred Super League campaign began with a 16-26 defeat to Salford Red Devils at The Jungle on Friday night.

Tigers Head Coach Lee Radford had the luxury of picking from a near enough fully fit squad for his first competitive contest at the helm.

Seven of the new additions brought in over the winter were selected in the matchday squad with Mahe Fonua, Jake Mamo, Bureta Faraimo, Kenny Edwards and Alex Sutcliffe all making their first competitive starts. George Lawler began the night on the bench and Joe Westerman started the match at loose forward to mark an emotional sreturn to Wheldon Road for his second debut.

Danny Richardson got the first game of the #NewCasEra underway and a fumble from the visitors straight from kick-off presented the Fords with a great attacking platform 10 metres out. Cas went through the forwards with Westerman and Daniel Smith going closest, however, the Red Devils managed to see out the set.

After a couple of handling errors from both sides, Westerman forced Salford into another mistake around 15 metres out. Cas shifted the ball right quickly through the hands of Niall Evalds, who then found Bureta Faraimo on the right wing. The debutant crossed the whitewash to score what he thought was his first Tigers try, although the referee signalled that there was a forward pass in the build-up.

Salford soaked up the pressure and managed to get themselves into Castleford territory. A penalty given against Castleford gave former Tiger Marc Sneyd the opportunity to kick for goal, and the halfback made no mistake to put the first points of the game on the board.

The Fords responded in the best way possible by getting their first try of 2022. A move which saw a fantastic offload near the line from Smith ended in prop George Griffin stretching out and touching down from a kick forward. Richardson added the extras to push Cas further ahead.

Unfortunately for the raucous home support, Castleford’s lead only lasted five minutes. A huge break from a chip over on the left saw Joe Burgess in space. The winger stepped away from Evalds’ challenge but was eventually brought down by Faraimo, but the ball was recycled quickly and Ken Sio was the man to capitalise, going over in the corner. Sneyd found the target with his kick from the touchline for the scores to read 6-8.

The momentum of the contest then swung Cas’ way on the half hour mark. Some lovely interplay between Mamo and Evalds drew in the Salford defence which was then followed up by a Fonua pass out wide to Derrell Olpherts for the #2 to skid over by the corner flag. Richardson couldn’t slot his conversion for the Tigers’ lead to stay at two.

Once again, the game shifted with five minutes of the first half to go. A six again call ten metres from the line put the Tigers defence under pressure and it was interchange King Vuniyayawa who barged over from close range and got the ball down. Sneyd kept his cool to convert. 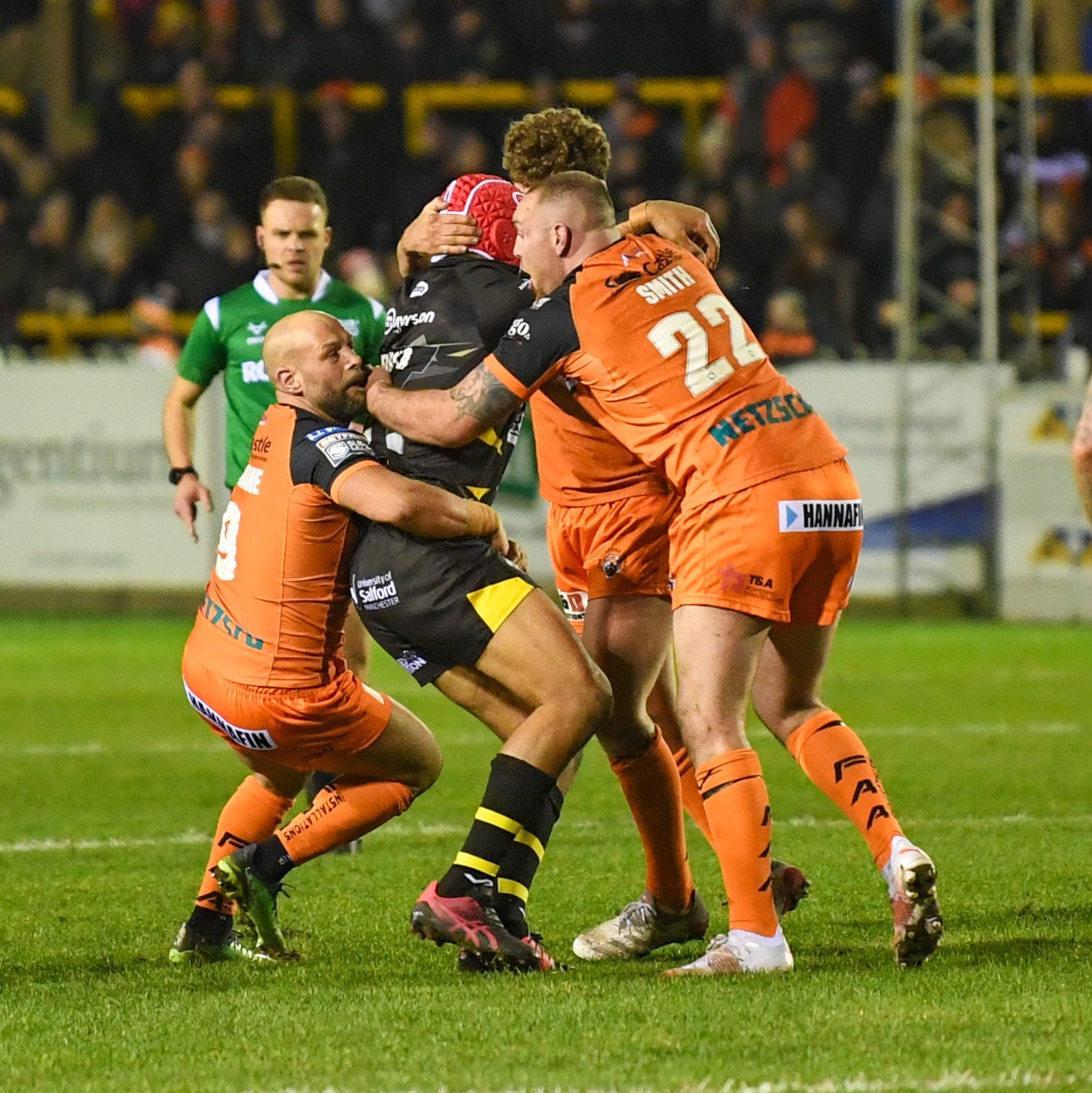 Just before the break the Red Devils got themselves some breathing space as they found space on the left-hand side once again as Deon Cross strolled in unopposed. Sneyd kept his perfect record from the tee, putting his side ten points ahead.

Moments before half-time Faraimo was sent to the sin bin for a high shot and the Tigers went into the sheds 20-10 down.

The second 40 got off to a slow start with the Tigers down to twelve men but Cas went closest in the opening stages. A knock on from Salford 20 metres out gave Cas possession in a good area and Fonua was the man to take up the challenge and burst towards the line but the centre was held up.

It was the #17 who then turned provider as the Fords rallied back into the game even with a man short as some great work from Fonua to play the ball for Olpherts to slide over for his second. Richardson did well to convert from out wide to close the gap to just four points.

Salford took conceding the try in their stride as they went through a strong period soon after. A few dangerous kicks forward forced the Tigers into dropouts and they eventually got their reward with a penalty which Sneyd making no mistake with his kick.

That was followed minutes later with another penalty which Salford elected to go for the posts with and #7 Sneyd converted to nudge his side eight points ahead.

With an hour gone a high boot from Richardson put Ryan Brierley under pressure and the full back couldn’t keep hold of the ball to hand possession to Cas five metres from the line. Trueman went inches away from scoring, which was then followed by a Salford drop out, but unfortunately the hosts couldn’t make them pay. 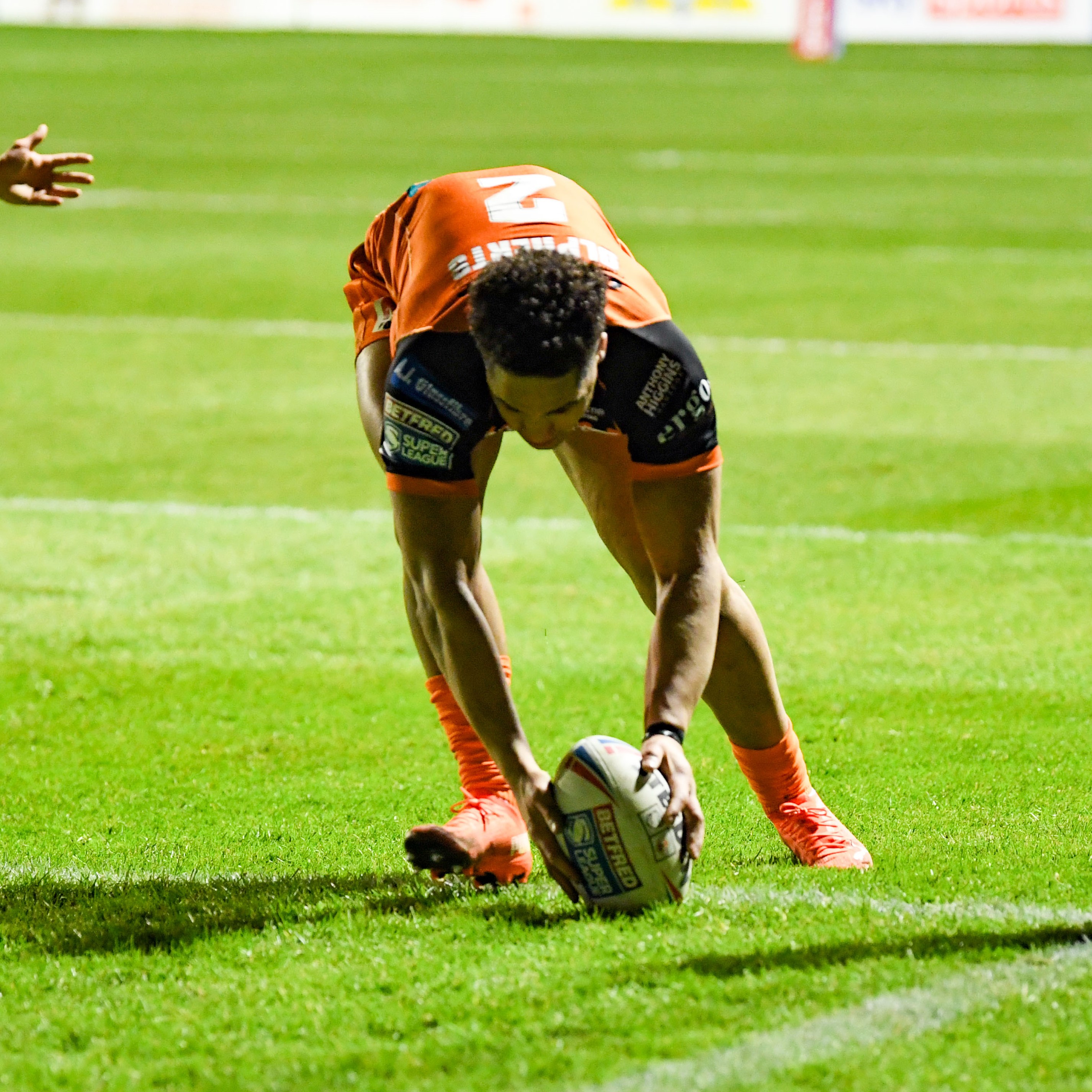 Sneyd was awarded another opportunity to go for goal after a penalty was called for a high tackle 25 metres out and the halfback duly kicked through the posts as the scoreboard went to 26-16.

The Salford halfback tried his luck with a drop goal in the closing seconds, but it cannoned back off the post and the clash ended in defeat for the Fords in their opening game of the season.