Castleford Tigers made it two from two in pre-season with a resounding 66-18 victory against Doncaster RLFC on Sunday afternoon. 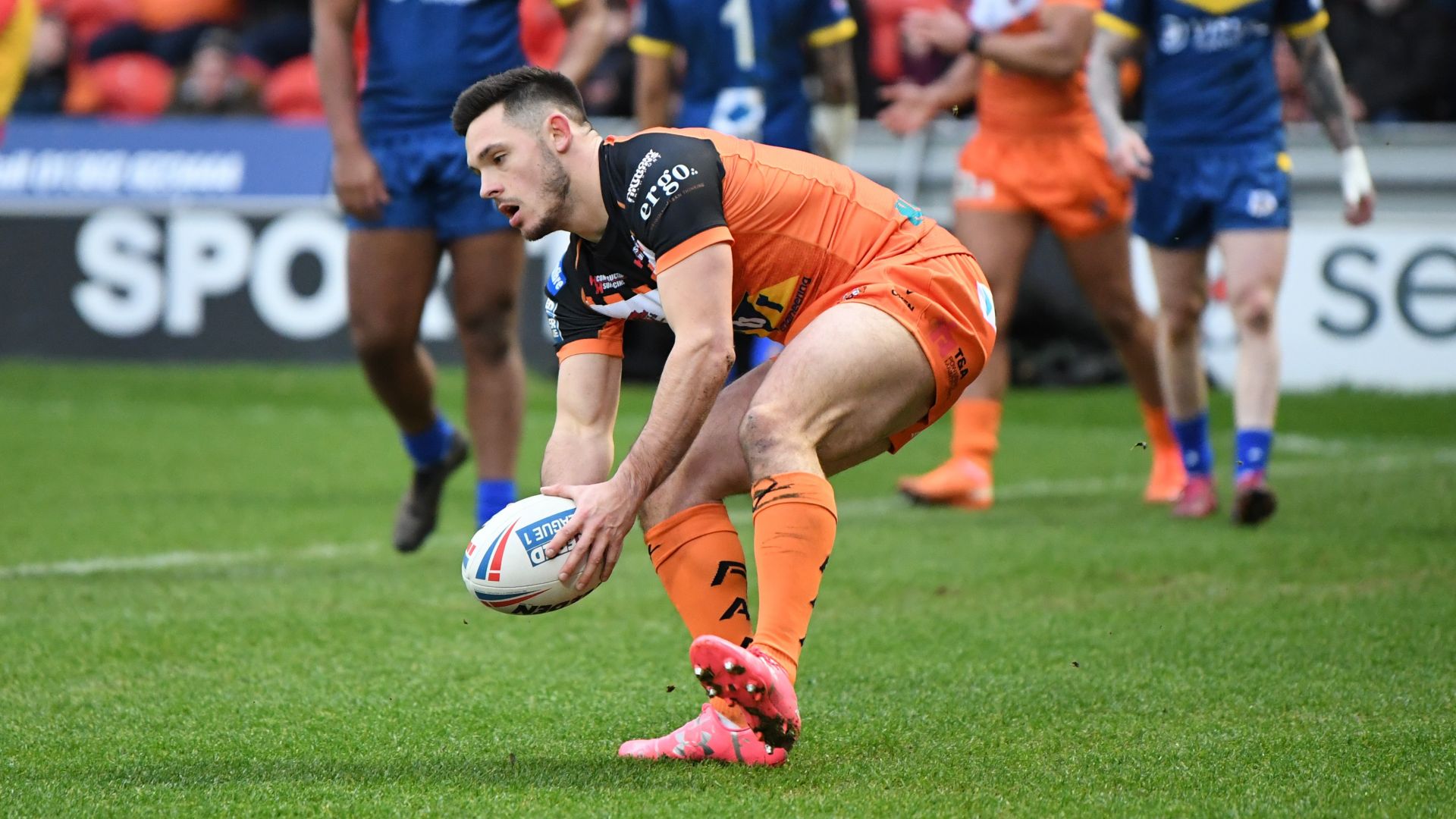 Castleford Tigers made it two from two in pre-season with a resounding 66-18 victory against Doncaster RLFC on Sunday afternoon.

Fords fans’ excitement grew even further for the clash as George Lawler was named amongst the starting 13 for the first time since joining the Club and loose forward Joe Westerman was picked to start for his first run out since returning to the Tigers.

Jordan Turner was a late addition to the matchday squad along with Academy players Lewis Ransome, Freddie Brennan-Jones, and Tom Marris.

Danny Richardson’s right boot got the contest underway at the Eco-Power Stadium and it was Doncaster who forced the issue in the opening two minutes as Connor Robinson’s awkward high boot caught out Bureta Faraimo. Fortunately for the Cas man, he managed somehow to get himself back over the try line and away from danger.

Moments later Castleford were in for the opening score of the game. The explosive Mahe Fonua used his strength to hold off two Dons defenders as he powered his way down the left-hand side to touch down. Richardson was accurate with his conversion from the far touchline to take the scores to 6-0.

The visitors were gifted another opportunity at the Doncaster line after Lawler had the ball illegally ripped from his grasp just inches out to give Cas a fresh set. The Tigers capitalised in clinical fashion thanks to a perfectly timed pass from youngster Cain Robb to Fonua and the centre handed the ball to Derrell Olpherts for the #2 to skid over by the corner flag. Richardson kept his perfect record from the tee to extend the Fords’ advantage even further.

Just under 10 minutes later another six again call in favour of the away team for holding Richardson on the 10 metre line got Cas in the scoring mood once more. Quick ball through the hands allowed Niall Evalds some wriggle room and the fullback turned on the afterburners to ghost away from the Dons’ defence to notch the third try of the clash. Richardson executed with his conversion to make it three from three for the scrumhalf.

Halfway through the opening 40 and the Tigers were turning the screw once more as Doncaster struggled to keep them out. Interchange Daniel Smith went close with a bulldozing run, however, it was some brilliant quick thinking from young star Robb who unpicked the defence with a perfectly executed step and scoot to dive over. Richardson then added the extras with the conversion.

The Fords were on fire and just a few moments later they followed up with their fifth score. A beautiful flowing move at full pace as Jake Mamo released Faraimo down the right, before the winger passed back inside to find Richardson on his shoulder for the #7 to run in unopposed from 20 metres out. The halfback then slotted his kick to put Cas 30-0 up with 24 minutes on the clock.

A rare foray into the Cas half ended in a high kick from Robinson which was caught well by Evalds and the fullback got the visitors back up the field and into Dons territory. It was the fullback who unlocked the door for a Cas winger to score again and on this occasion it was Olpherts who snuck in out wide for his second. Richardson made no mistake with his kick to take him to six successful conversions in a row. 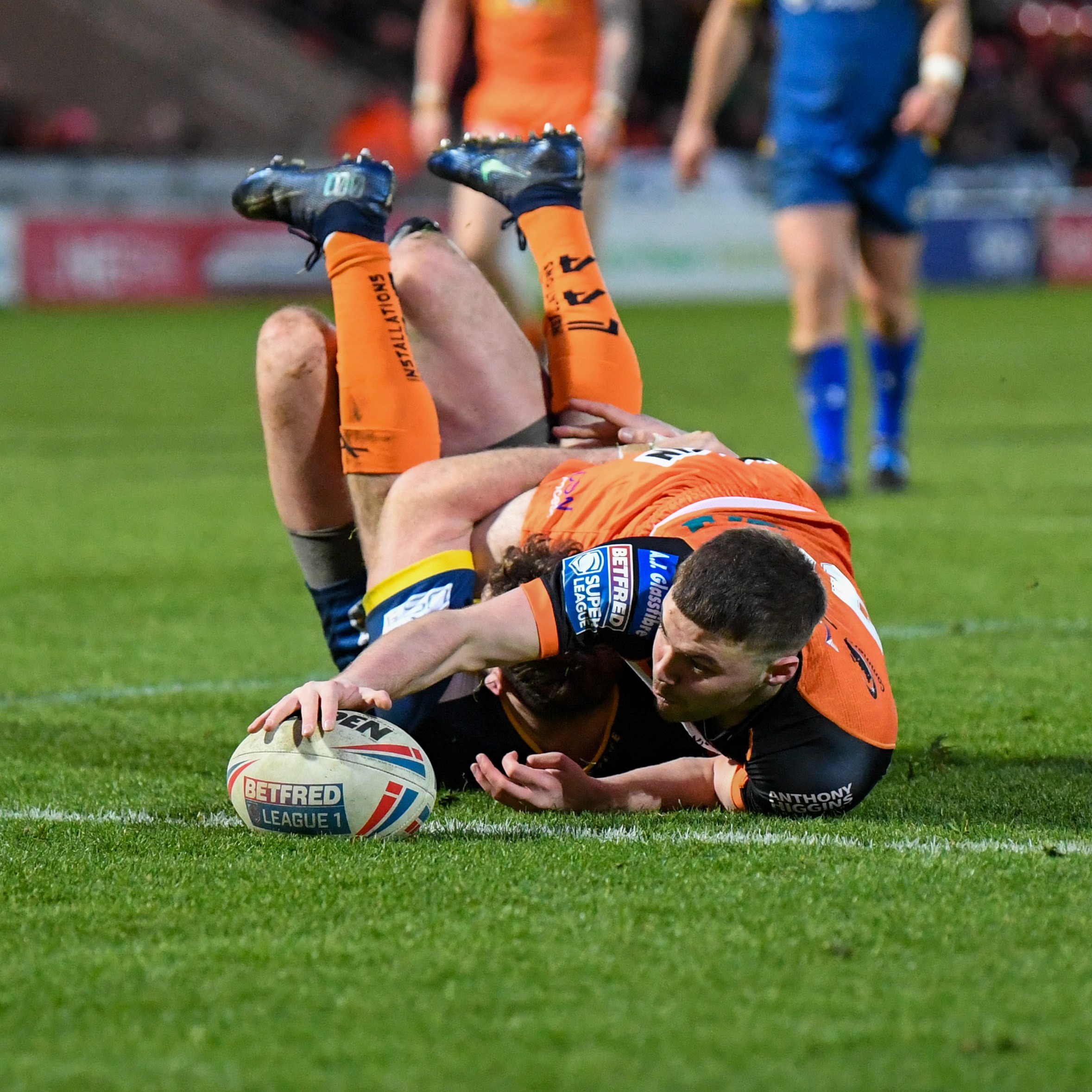 Castleford’s attacking threat was too hot for Doncaster to handle and with eight minutes remaining before the break, Alex Sutcliffe got his second try in Cas colours. Some lovely interplay between Richardson and Evalds opened up the space for Sutcliffe to run in. Richardson was unerring with his kick to push the Tigers even further into the lead.

Doncaster’s spirit wasn’t broken however, and they almost got on the scoreboard through prop Zac Braham who came within inches of the line with a barging charge into the Cas line. Although, with moments left before the half-time hooter, a perfectly weighted kick forward from Jake Trueman’s right foot bobbled up on the line to evade Evalds but Cheyse Blair was there to pounce for his first score of pre-season. Richardson showed his quality again to smash his conversion over for the score to read 48-0 at the break.

The second-half began with a couple of unforced errors from both sides and the hosts were the first to string an attacking move together. A classy step from Ross Whitmore got him away from Robb’s clutches before he was brought down a metre out. Robinson’s kick to the left which followed caused havoc as Junior Vasuitoga attempted to catch but fortunately the wing spilt backwards.

Doncaster’s bright start to the second 40 continued and this time they executed well to touch down for the first time. A chip over the top fell kindly for Sam Smeaton to pass to Misi Taulapapa who acrobatically dotted down in the corner. Robinson slotted his conversion to make it a 48-6 game.

The Dons kept the pressure on the much change Cas line up which took to the field in the second-half but some solid defensive work from Junior Vasuitoga kept Travis Corrion out.

All of the good work done by the hosts in the second-half was undone as a sloppy pass on halfway fell loose and Sutcliffe was first on the scene to pick up and showed his speed to race over to claim his brace. Jack Sadler took over the kicking duties and produced a well struck kick between the posts.

Braham was leading from the front again after he was handed the ball ten metres out by Ben Johnstone, however, the forward was held up well by Daniel Smith. From the resulting play a pass wide to Leon Ruan was intercepted by speedster Jason Qareqare 20 metres from his own line and the winger displayed his lightning pace to streak away and cross. Sadler made no mistake with his second conversion attempt of the afternoon for the scoreboard to read 60-6.

The League One side were not afraid to keep coming at their Super League opposition and after maintaining some solid possession near the Cas line, Braham was able to dive over from a crash ball. Robinson kicked through the posts to the delight of the home support with 18 minutes left to play. 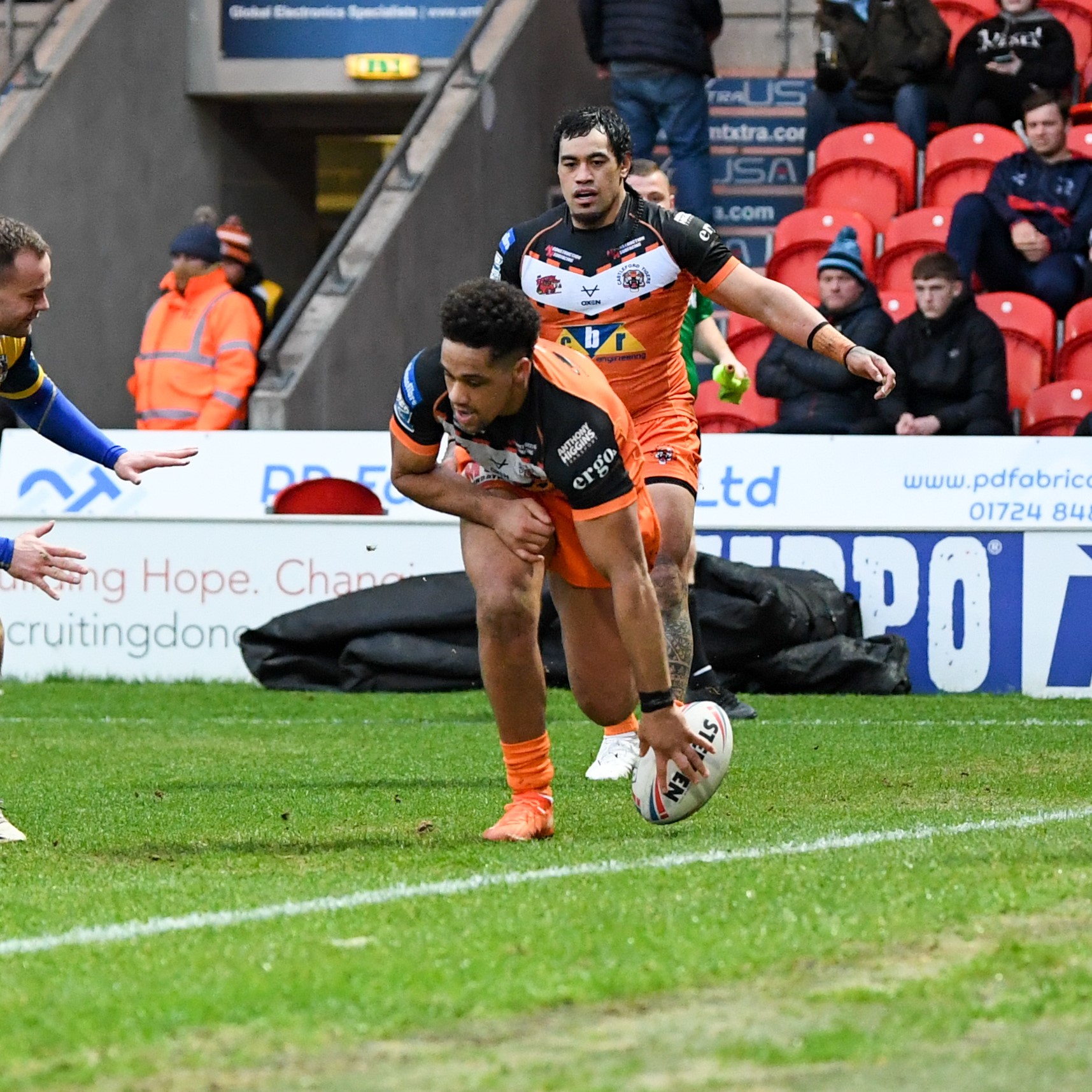 With ten minutes left before full-time Cas forced themselves into attacking range and displayed their quality again. Youngster George Collins, who got himself a debut try against York City Knights in the previously friendly, showed his threat again as he darted over from 15 metres out. Sadler converted to add the two points.

There was still fight in The Dons and they opened up the Tigers on the right-hand side and a well-timed pass from Taulapapa allowed space for Tom Halliday to charge forward and cut by James Clare to touch down. Robinson notched his third conversion in a row for the Doncaster halfback.

A late flurry forward by the hosts was quelled by Castleford and the match finished in a 66-18 victory for the Tigers to round off their pre-season friendlies with a win.