A strong first half performance saw Castleford Tigers secure a 10-32 victory over York City Knights with a slew of debuting Tigers. 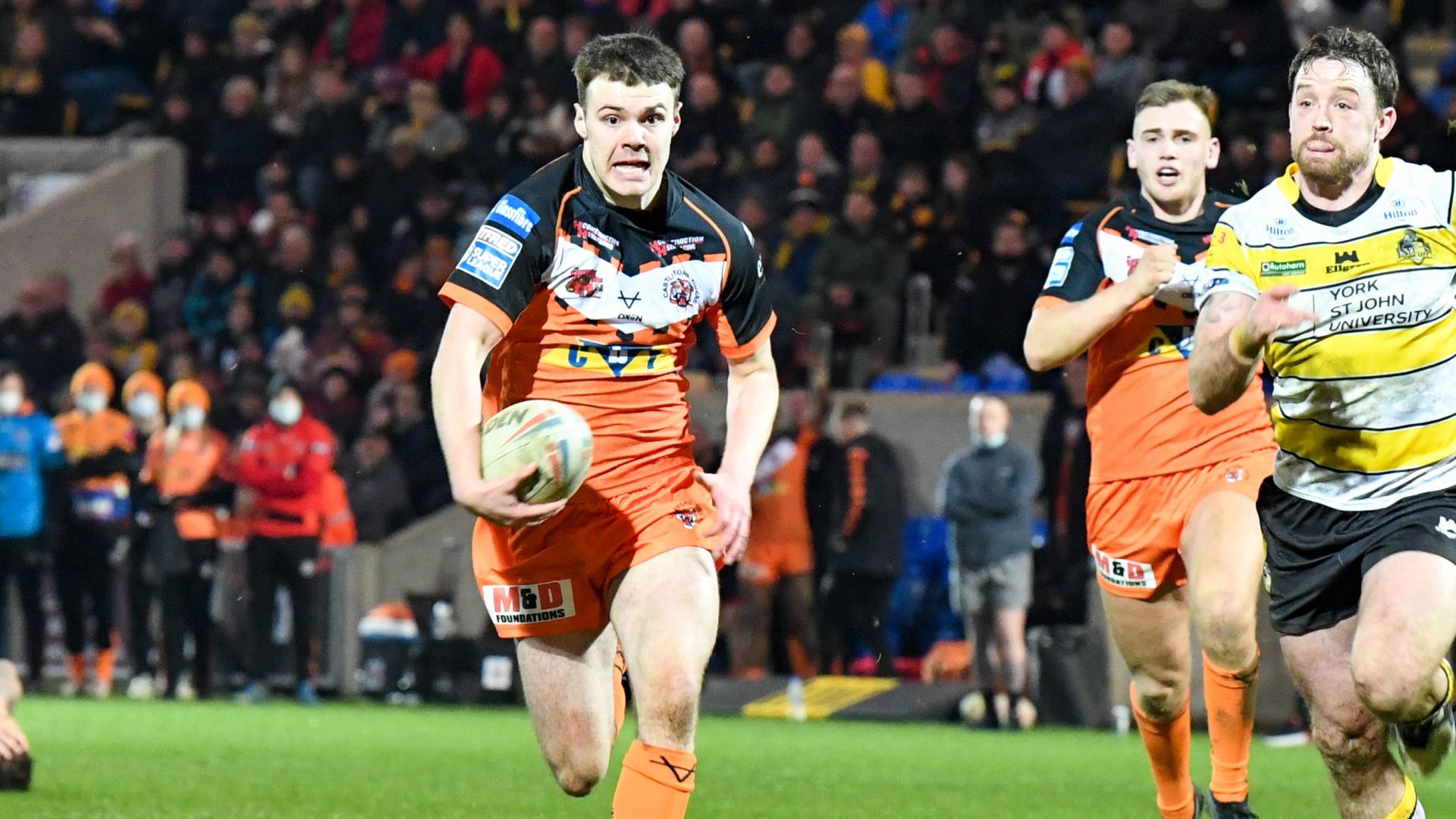 A strong first half performance saw Castleford Tigers secure a 10-32 victory over York City Knights with a slew of debuting Tigers.

The main stand of the LNER Community Stadium was abuzz with excitement for the Knights welcoming the Tigers, with a brilliant number of the Fords faithful making the trip and adding to a brilliant atmosphere.

Former Tiger Jamie Ellis got the show started off the kicking tee and it didn’t take long for Cas’ right edge to find some strength. Bureta Faraimo was firing on all cylinders early and showed early signs where Radford’s men would target.

Following a high shot on Daniel Smith that right edge once again struck, Danny Richardson finding a pass to fullback Niall Evalds who threw a hitout pass to Faraimo to crash in the corner for the first Fords score in 2022. Richardson adding the conversion from the wing.

Adam Milner was drafted in as captain for the match with Head Coach Radford saying pre-match: “When you talk about Castleford and what it is as a club, he epitomises that,” but unfortunately early on he looked to suffer a back injury which spoiled a special day. In stepped Cain Robb who showed off his quick game throughout.

Seeing the link up plays between Evalds, Trueman and Richardson was entertaining and exciting, with a couple of close calls by York’s line - one of which resulted in a goal line drop out. Smith drove towards the post and then Cas worked it to the left this time with Evalds again providing an assist but this time for trialist Junior Vasuitoga, with the Cas bench applauding wildly for the Private from the British Army. Richardson again adding the two extras from out wide to double the lead by the ten minute marker.

Faraimo at both ends of the field looked like he was determined to eat extra metres, but he almost cost a great moment for Jake Mamo… almost! Alex Suttclife looked strong in defence but on that right edge he threw a ball out to the winger who found a lot of space and perhaps should have thrown the ball inside to Mamo, but didn’t and was stopped inches from the line. Richardson and Evalds followed it up and worked it around before it redounded to Faraimo again who dumped a pass by the edge of the field to Mamo who did get his first Cas try. A first missed conversion in 2022 for Richardson on the back of it.

For a first hit out of the year, there was bound to be some pre-season aggravation to blow off and York’s Pauli Pauli and Jacob Ogden had flare ups, with the latter shoving and jousting with Jake Mamo as the Tigers looked to twist the screw. The Fords fans gave Pauli some stick but much to his own credit he took it in good spirits. The bit of needle in the game led to some scrappiness from both sides, making mistakes with ball strips and knock ons.

Cas had to sustain some Knights pressure following a penalty on their own line but held firm as the half hour mark ticked over.

More great Evalds play as Cas had York on the back foot allowed him to throw a delayed pass to Faraimo who ran it in and towards centre for his second score and an easy Richardson kick for 22 points.

The next score didn’t take long, more right sided work, Tyla Hepi got off an offload to Cain Robb who juked closer to Mamo who sprinted towards the line and passed to Alex Sutcliffe for his first Cas score. Richardson hitting the posts with the kick leaving it at 0-26.

Almost a wholesale change of team bar a few spots for the second 40 led to a scrappier half. Smith almost made it a perfect start though clean through 20m but the pass got knocked on.

York came out much stronger from the break, making far more threats than they did in the first half. Ten minutes in it paid off for the Knights with Will Oakes delicately managing along the pitch side to score York’s first try.

Olpherts, Fonua and Qareqare were drafted in in the outside backs and all drove forward with intent. Olpherts stopping a high kick from Ellis which was allowed to bounce and kicked again before being recovered by Cas for a goal line drop out. But the former Cas man in Ellis chipped a delightful ball on the second tackle when he spotted a gap, Matty Marsh raced onto it for York’s second and an easy conversion to make it 10-26.

The match became a real arm wrestle from the hour mark, neither really establishing consistent play. This clearly led to some frustration which saw James Clare and Liam Harris come to blows and both being sent to the sin bin.

Both the Knights and the Tigers tried to make scoring plays happen but neither could finish them. Late on with around four minutes to go, Ellis was about to be tackled and attempted a slap pass but it came loose. Youngster George Collins capitalised on the loose ball and raced 25m to score on his senior bow. Richardson made it four successful kicks from six attempts to wrap the game up.

A good win, with areas to improve but the Tigers with a lot of youngsters and debuts were too strong for the York City Knights and earned their first win under Lee Radford.