A resilient, tough, and hard fought victory for the Tigers who took a much needed, and well deserved two points at Wheldon Road! 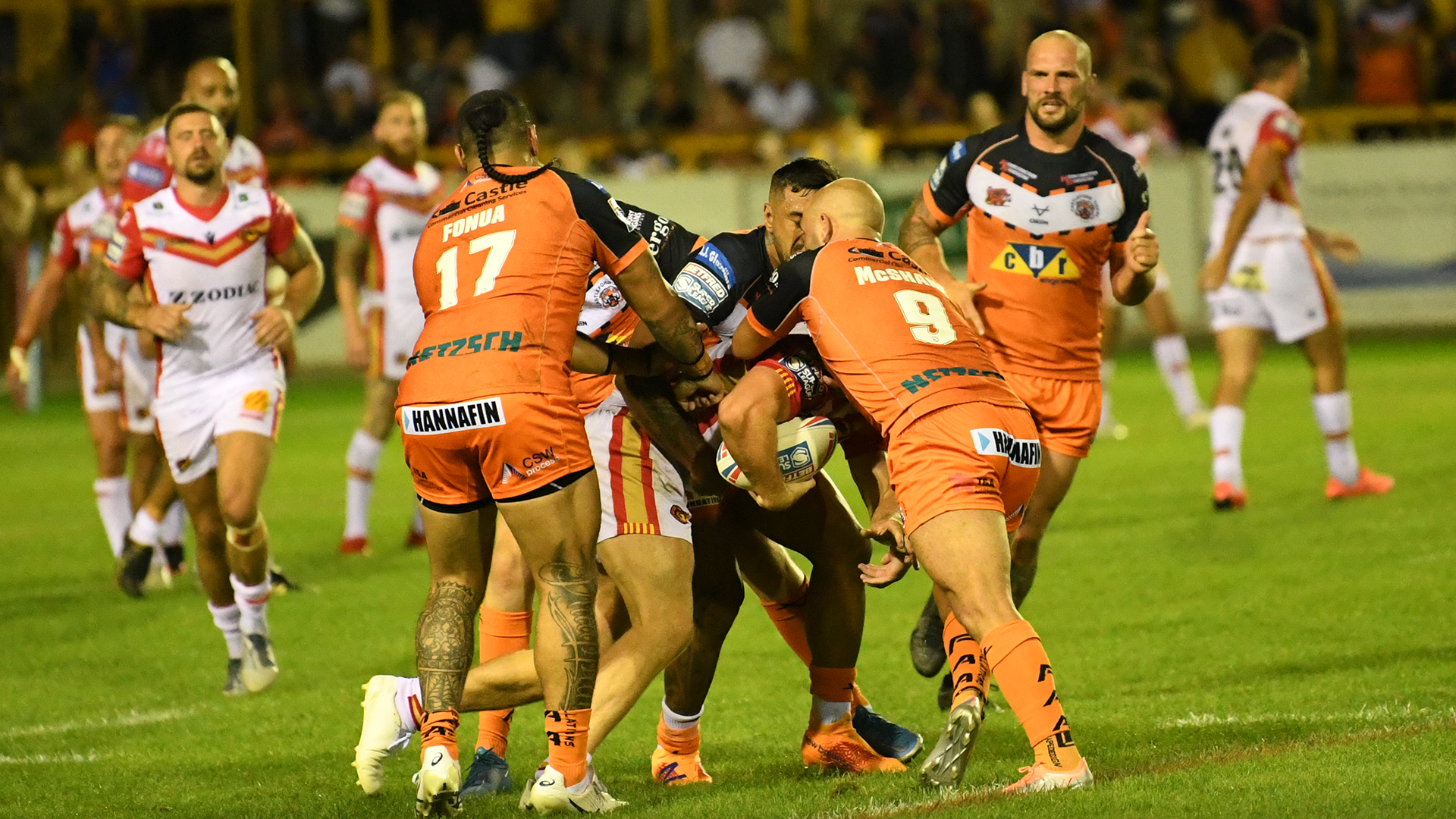 A resilient, tough, and hard-fought victory for the Tigers who took a much needed, and well deserved two points at Wheldon Road!

Lee Radford made three changes to the starting 13, with George Lawler, Adam Milner and Alex Sutcliffe, while Jason Qareqare and Daniel Smith came onto the bench.

In the opening set, Catalans broke down the right through Chan. Paul McShane, who played in the halves tonight, caught up with the visiting second rower and forced an early knock on.

Cas showed some more defensive excellence as they kept Catalans out for three consecutive sets before they gave away a penalty. The Fords stood strong and once again kept the visitors at bay.

The Tigers struck first! Gareth O’Brien made a break through the Dragons defence, feinted a pass to Alex Mellor on his right shoulder. Sam Tomkins was fooled and O’Brien went under the post to open the scoring.

Cas got a penalty on 17 minutes for a high shot on George Griffin and looked threatening. Westerman gave the Fords great field position on the third tackle. The ball was put through hands via Eden, who looked to drop it off to Faraimo inside the ten metres but knocked on.

Castleford extended their lead to eight points on 20 minutes as the Dragons were penalised for offside. O’Brien added the extras from right of the posts.

A loose carry from Catalans was dropped into the hands of George Griffin. The Fords made it count again! The ball flung wide to Greg Eden who went over 10 metres in from the left touchline.

Catalans find their found breakthrough of the game through Sam Tomkins. A quick play the ball from the Dragons is played to Tomkins who sneaked over with a step from close range. The full-back failed to convert his own try.

A solid performance from the Fords in the first half saw them go into half time 14-4 up! 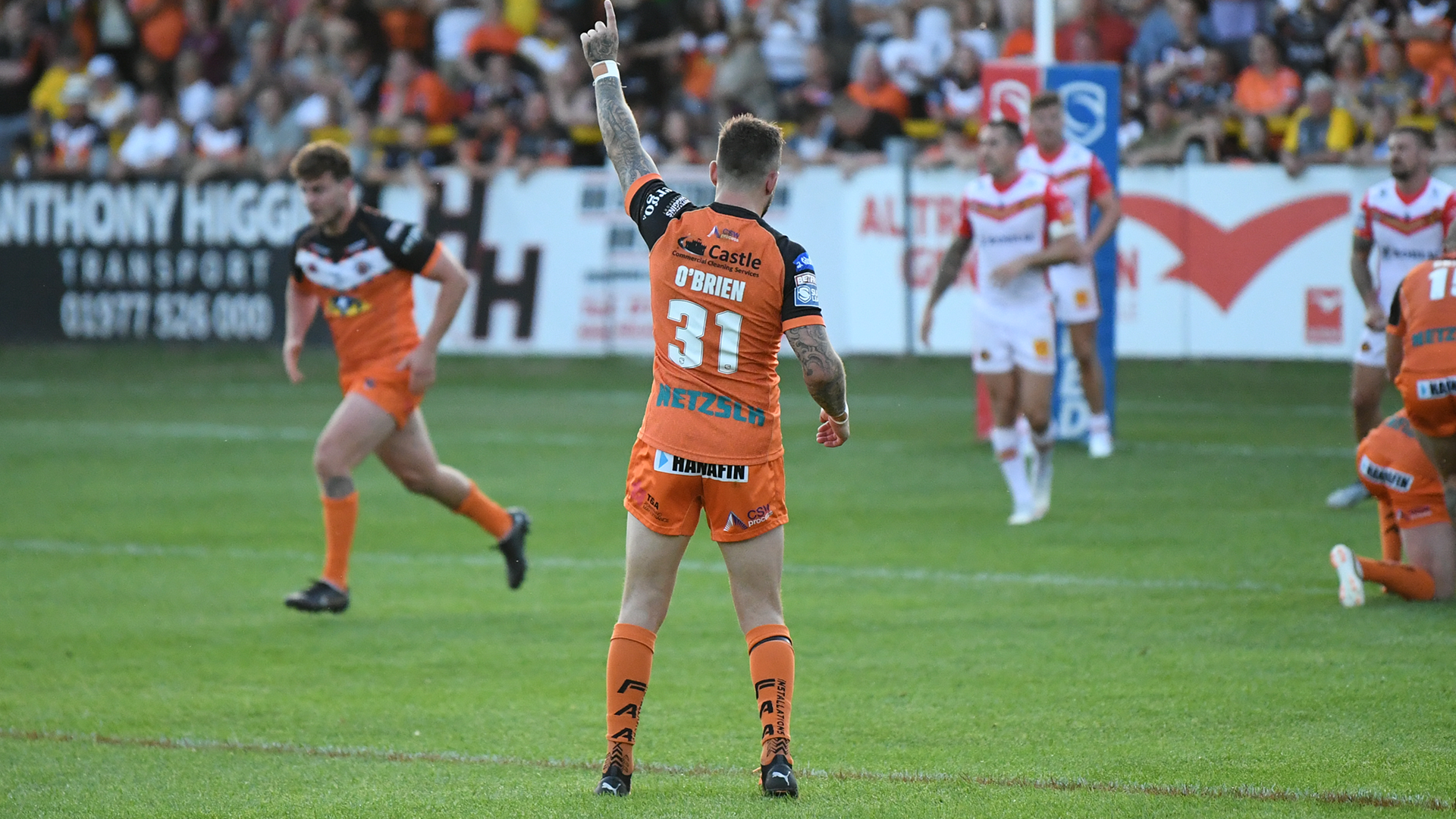 The Dragons opened the scoring in the second half. Catalans were thought to have knocked the ball on, and McShane gathered it and ran 80 metres. Only for the ref to pull it all the way back to the Wheldon Road end. Catalans capitalised from their penalty and Chan barged over from close range. Tomkins scuffed his kick and failed to convert.

A string of back-to-back penalties given from the referee to Catalans over a ten-minute period followed, but the Tigers remained defiant, with some outstanding defence from on to thirteen. Catalans fail to score any points due to the sheer resilience from Castleford.

A long kick downfield from Gareth O'Brien was dropped by the Dragons inside their own 30 metres and that put Cas on the offensive. A penalty given in Cas’ favour this time, and in-field goal range, Radford’s men took the two points on offer, and Gareth O’Brien kept his 100% record for the evening with the boot alive.

Catalans flung the ball wide to Franco, but Faraimo was on hand to tackle the Catalans winger into touch. After being turned around, Catalans broke again but a magnificent shift from O’Brien quelled the attack. The French outfit then flung the ball left, only for Whare to pass it into touch thinking Tom Davies was there.

Cas extended their lead further through the reliable boot of O’Brien. The visitors were penalised in front of their own posts for an illegal ball steal and The Fords added an extra two.

Faraimo intercepted the ball on his own 10 metre line and ran the length of the field to ground the ball. The ref, however denied the try for a knock on. In the conversations that followed, Matagi saw yellow and would see the final minute from the sidelines.

Special mention to Paul McShane, not playing in his native Hooker role, was absolutely everywhere in both attack, and defence tonight.