Read our match report as the Tigers progress to the Challenge Cup quarter-finals with a win over Leeds Rhinos! 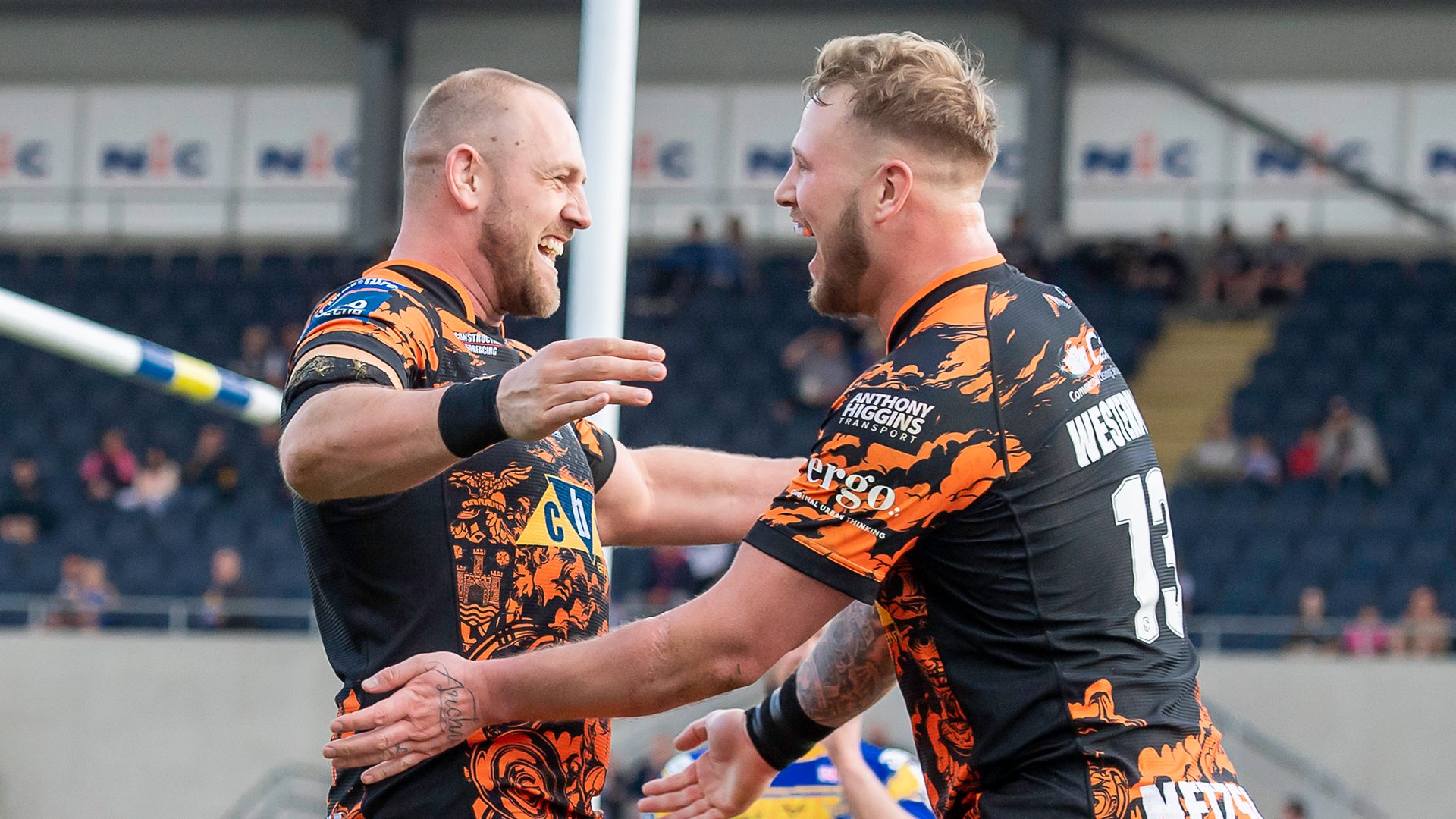 Castleford Tigers put on a performance to remember at Headingley Stadium to defeat Leeds Rhinos by 40 points to 16 and book their place in the Betfred Challenge Cup quarter-finals on Saturday afternoon.

Tigers Head Coach Lee Radford was grateful to have a number of First Team regulars back in contention for the Cup clash. Niall Evalds and Jordan Turner were both selected in the starting 13 after recovering from injury. #ONECLUB men Nathan Massey and Adam Milner, who made the game day squad for the first time in 2022, were chosen on the Fords bench.

The right boot of Gareth O’Brien got the contest underway in perfect sunny conditions and the first five or so minutes were dominated by searching high kicks from O’Brien and Aidan Sezer, although both sides’ catchers were equal to it.

It didn’t take long for the Tigers to score the first try of the contest with a beautifully worked score. An offload in the middle of the field got Cas on the front foot and some fancy footwork from Kenny Edwards got the second-rower free down the left-hand side. Edwards then waited patiently for the perfect time to pass inside to Jake Trueman and the halfback was clear through to dive over. O’Brien was desperately unlucky to see his kick from the touchline come back off the post.

With the wind in their sails, the visitors were forcing mistakes out of the Rhinos as the home team were punished for offside. The Tigers went through the forwards as Joe Westerman offloaded to Massey just a couple of metres out, although the prop found the pass too hot to handle and spilt forward.

Rhinos pounced on a loose ball in the centre of the field as they looked to force a reply. Ash Handley tried his luck with a chip over the top out wide on the final tackle, but the attack fizzled out as the ball bounced out of play.

Moments later the Fords showed their clinical edge to notch their second score in just 16 minutes. The Tigers were grateful to have the electricity of Evalds back in the side as the fullback took the play left and produced a fantastic short pass to Jake Mamo who stepped on the gas to find the gap between two defenders and dot down. This time O’Brien made no mistake for Radford’s side to take a 10-0 lead.

After a Greg Eden knock on and a penalty 15 metres from the line, Castleford then had to show their defensive resilience. Rhinos played the ball quickly to the right to Liam Tindall and the winger looked like he was in before some fantastic covering defence from Eden and Turner barged the Rhinos man out of play.

The Tigers looked to attack down the left, utilising the inform Eden but Evalds’ pass wide to the #23 was too high for him to take. That was followed by a break from Sezer as the scrum half burst through the line but a fantastic last-ditch challenge from Evalds stopped him with around 20 to go. Leeds tried their luck on the last with a kick through and forced Trueman into conceding a drop out, but the Tigers defence stood firm. 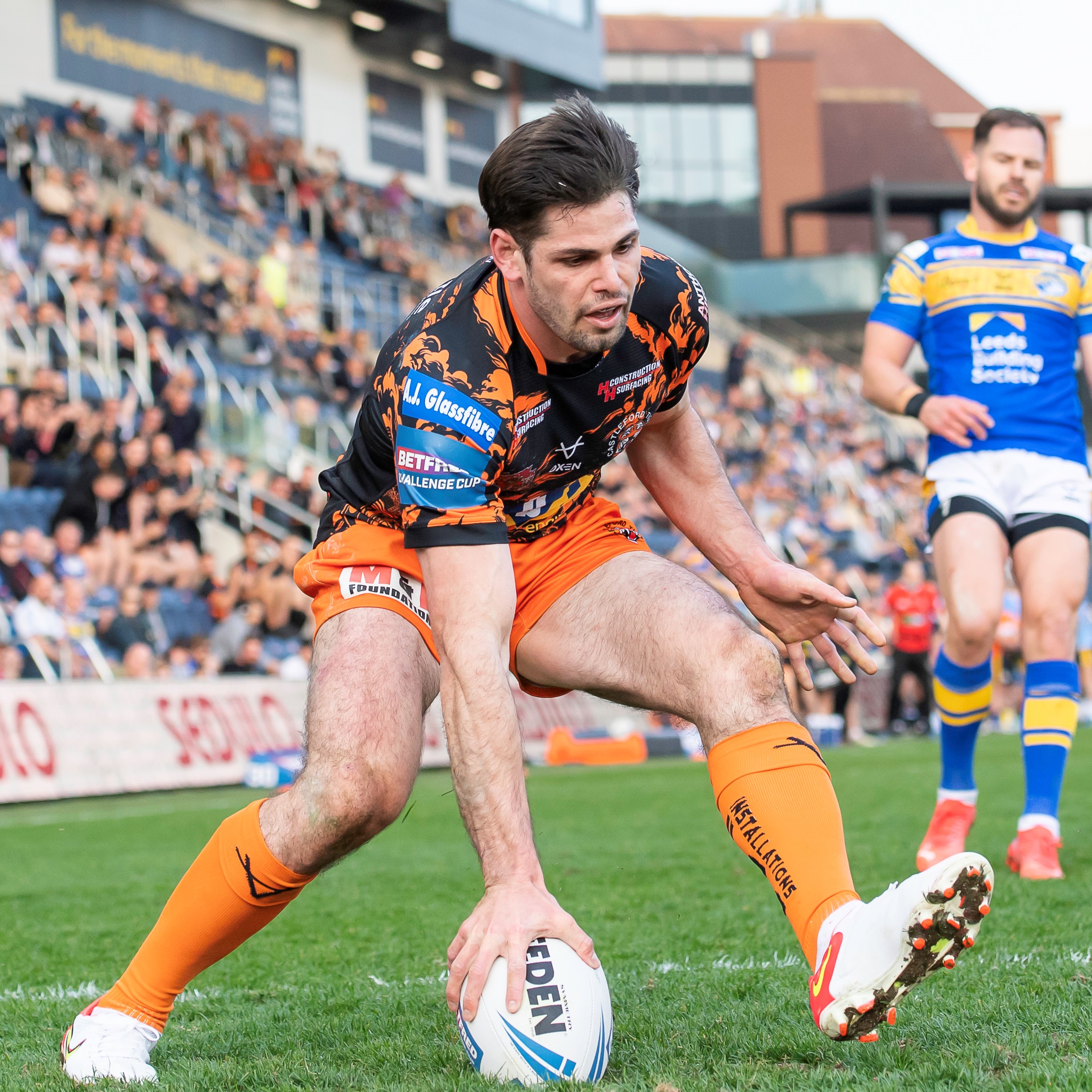 Cas then got their reward for some outstanding defensive effort as on the half hour mark, they cut the Rhinos open again. This time it was the forward pairing of Westerman and Liam Watts who provided the magic as Watts produced an outrageous offload out the back of the hand to O’Brien for the scrum-half to crash over the try line. The Fords’ #31 then successfully converted his own try to push his side 16 points clear.

Leeds’ first half got worse as they were then down to 12 men after Brad Dwyer was shown a yellow card by Liam Moore. The Tigers then seized the opportunity with both hands and it was Edwards, who was having a standout half, who spun the ball out the back wide to Turner who ran in from 10 metres out. O’Brien slotted his kick from out wide to send the travelling Fords faithful into raptures.

As the clock ticked closer to half-time the visitors compounded Rhinos’ torrid afternoon as a quick pass from Trueman into the hands of Lawler and the second-row sprinted through a gap to score his first try in Cas colours. O’Brien made no mistake from the conversion for the visitors to take an incredible 28-0 lead at the break.

Rhinos kicked off the second half and the hosts came out with a point to prove as they looked to get on the front foot early. A small break from Blake Austin got Rhinos into Cas territory and a kick forward from Rhyse Martin had to be swatted away by Bureta Faraimo.

Leeds then capitalised from the kick out with just over five minutes of the second half gone. Sezer forced the play down the left and hit Rhyse Martin with a pass for the #12 to barge over. Martin was then on kicking duties but smashed his conversion well wide of the uprights.

The hosts now had the Headingley crowd behind them as they came flooding forward again, making it back-to-back scores to start the second 40. It was the left edge that turned out to be fruitful for Leeds and it was Liam Sutcliffe who turned on the afterburners to skid over. Martin was given the kicking tee again from a similar position but on this occasion, he knocked the kick over to close the gap to 18 points.

Rhinos were in the ascendency and were throwing caution to the wind, however, they forced the play too hard wide right, and Eden pounced to intercept and sprint over from 60 metres for a trademark score. O’Brien clipped his conversion over from in front of the posts to give Cas a 34-10 lead and put a dent in Leeds’ comeback hopes.

That Cas score didn’t deter Leeds from chancing their arm with an hour gone but Mamo was right on cue to intercept as the home team passed wide on the last. It was then the visitors turn to go close in a back and forth second half, but Eden was denied on the wing by a covering tackle which stopped him just short. 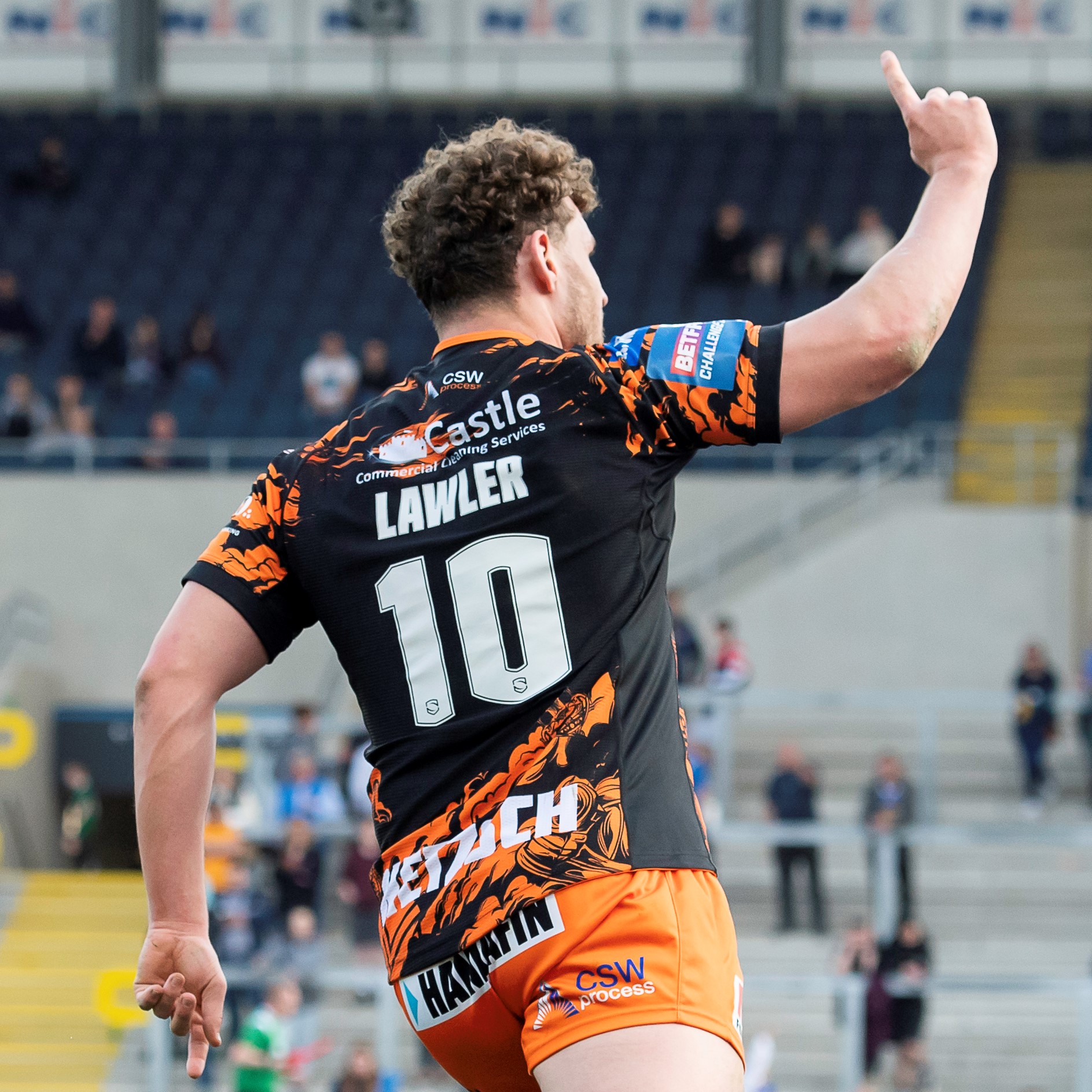 With 14 minutes remaining Leeds did make a spell of pressure tell and it was Martin who claimed his brace. The forward brushed off a couple of challenges as he made his way to the line and dotted down before converting the try for the scoreboard to read 34-16.

Castleford put the icing on top of the cake with a sublimely worked try late on, and not for the first time it was Evalds who was the provider. Tigers’ #1 threw a gorgeous hit out pass to Eden who finished in typical style by the corner post for his second of the half. O’Brien took the tee and placed his kick through the posts to round off a superb display as the Tigers progress to the Challenge Cup quarter-finals in style.